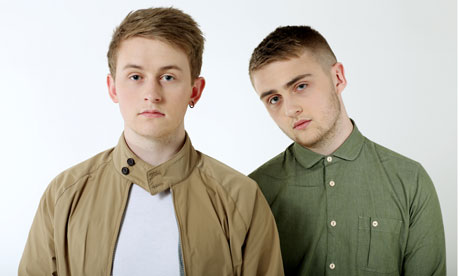 “Even people who think we’re too commercial, which I don’t think we are at all, I say to them: what would you rather hear on the radio, "White Noise" or David Guetta? They can’t say anything back to that.”  – Guy Lawrence, Disclosure

First some context: Disclosure are this week’s G2’s cover stars; this year’s cover stars. With chart hits and sales over 300,000 for one single alone their commercial success is undisputable. But there’s something really depressing about the idea, as put forward by them in the G2 piece,  that it’s either them or Guetta.

In their paradigm there’s two choices for pop:
The thing is, why can’t it be that people’s choices for successful music are:
I don’t have a specific beef with Disclosure I really don’t – I played the El-B remix of their tune at Fabric last year - but “it’s us or a shit thing” is what mediocrity looks like. It’s what capitulation looks like, I’m sorry but it is.

This kind of slick, clean, sanitized music, when you look past the admittedly catchy saccharine hooks, is really empty. Disclosure themselves don’t even seem to want you to look past it: “All we care about is people listening to the music… they can take what they want from it.”

It’s time for something new.

We need to reject this kind of neutered brainwashed thinking and build something vital for this era. Something totally built by, owned by - and unique to - 2013.

Because this is sorta my issue with all the big “post”/“bass” guys, now playing housey tech mixed into techy house with additional retro anthem bashing, the guys who build up the DJ hierarchy which ends in Disclosure headlining your festival.

I keep thinking this…

In twenty years time, these DJs will be in their 40s and their kids will be old enough to ask them: “Dad, what did the music sound like when you were the biggest DJ?”

And they will safely be able to say:

“I could drop our song with Eliza Doolittle, "Neighbourhood" by Zed Bias and "Saved My Life" by Todd Edwards and no one could name what decade they’re from.”

Which is exactly what Howard did in the G2 piece this week.

If the fact that your sound is indistinguishable from music made over decade before doesn’t scare you shitless as an artist, I’m not sure we’re on the same page here.

Music should be vital.

It should be essential and it should be unique: of its time, for its time, belonging to its time. You where there. “Were you there?” “Yes I was there.” “Where were you in ’92?” “I was there too.”

Great music is the cultural journal of record of its time, the soundtrack to generations.  ’66, ’77, ’88, ’93, ’99, ’03, ’06 – if you read this blog you should pretty much instantly be able to tell just from those numbers what movements blew up then. Depending when you were born you’ll go misty eye’d to “Strings of Life” or “Valley of the Shadows (31 Seconds)” or “Spirit of the Sun (Steve Gurley mix)” or “Midnight Request Line.” They define a time and a place.

“[Disclosure] recoil from questions that go beyond the music,” notes Sam Wolfson in the G2 piece.

To paraphrase Vex’d, you were wrong, there is a third choice: lets make it something incredible please.
Blackdown at 2:35 pm