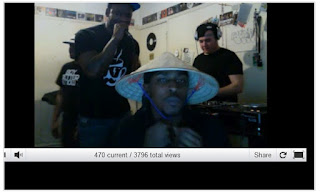 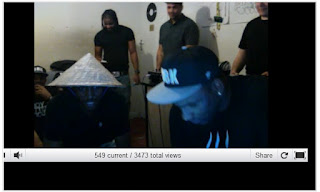 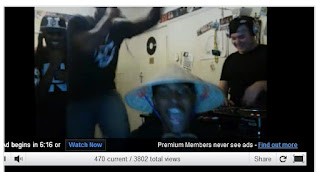 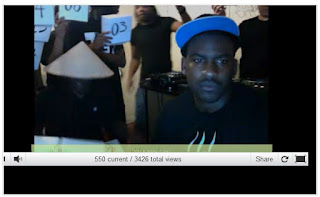 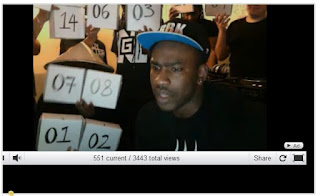 A few weeks ago a grime MC entered the UK top 50 charts. Five years ago this was pretty much unthinkable but in 2011-2012 it’s hardly news, as in recent times a layer of the grime scene’s a-list have migrated from east London badmen to saccharine sweet chart MCs backed by major labels. The difference here is the MC is the single is grime and the MC did it all by himself.

“96Fuckries” is the remarkable new single by JME, remarkable because as an actual grime track it’s not that distinct from previous JME material yet been successful. The track’s title comes from the number of lines he spits and indeed hand writes out on the YouTube metadata. The best line however has to be the first - “Oh please, I couldn't care bout your T&Cs” – amusing because who else in grime would spit about legal terms and conditions? Then again who else would spit about iOS5 or indeed get something into the charts with 96 bars but no chorus?

While much of grime’s lead MCs seem content making commercial tracks with token bolt-on chorus’ sung by irrelevant female session singers, JME’s too strong minded to pander to commercial clichés. The track’s final three lines, 94-96, seem a reference to those lost once-grime stars: “MCs think they're raising the bar/By spitting on 14 genres a day?/Safe. Raising the bar makes it easier for me to score anyway!” And score he did, using the fanbase he’s built up over years of hard slog to take the track into the national charts.

And this is the remarkable thing about “96 Fuckries”: JME has no record label as such and doesn’t have a PR team. “96 Fuckries” was not supported by national radio playlists nor sent out to journalists. Half the DJs in grime didn’t get it, not that their collective weight behind a track could put it in the charts anyway. JME doesn’t really do interviews with blogs or magazines per se. If there’s a PR rule book, JME’s ignoring it.

Though JME’s long since been an independent, free thinker, his hardcore grime credentials are unquestionable: he founded BBK alongside grime legends DJ Maximum, Jammer and his brother Skepta, and was part of Wiley’s Roll Deep and before that Meridian Crew (who had a serious street reputation). He came through the pirate radio scene on stations like Heat FM and Rinse. Yet if grime MCs turned themselves from garage hosts to “artists,” with grime a culture not a sound, then JME has pushed that expansion forward. He also went to university, is a technology “early adopter” and quickly established himself as someone who leads not follows.


“Not following” is an apt term in the quest to understand “96 Fuckries” success. To date JME has built a 133,000 strong twitter following yet follows no one back, literally not one user. He’s tweeted over 57,000 times. His YouTube channel has 29,000 subscribers and has had over 17,475,000 views, with videos as diverse as records of every time he’s needlessly stopped by the police to BBK launching their own range of Pay As You Go top up credit. So as the “96 Fuckries” release approached he distributed his music on iTunes, dropped a music video and got a series of high profile music acts  (Tiny Tempah, Ed Sheeran, Calvin Harris) supported him by RTing the download link.

This is how the social media revolution was meant to be; a meritocratic system that put the tools of distribution in the hand of the people and gave them a level playing field with the established powers that be. Instead the reality was that dominant players just imported their reach, resources and reputation into social media, quickly dwarfing those attempting to work from the bottom up. Stars being “discovered on MySpace” was usually a quaint fabrication for PR purposes by the major label that had funded their development deal. But JME is completely different.

To celebrate its release, JME, his brother Skepta and sister Rinse FM’s Julie, alongside DJ Maximum, Jammer and friends did what any pirate station crew would do in 2012: took to Ustream, to play give-away games (“Snapback”) with their fans, wear silly hats, spit bars and bigup anyone who’d bought “96 Fuckries.”


UPDATE: since I wrote this piece, I bumped into JME's sister, Julie, lost at a train station. This might seem perfectly normal occurance in "blog land" but in a city of 8 million people, it is pretty unlikely. In my day to day life it's pretty unlikely. She didn't know who I was and looked pretty baffled by me randomly knowing who she was and offering to help, but I explained I  was on Rinse, had written her brother's mix CD sleevenotes four years ago and gave her some directions: I hope she got to where she was going safely.
Posted by Blackdown at 7:59 pm

And 1 good reason not to rate him. That Meridian Bloodline thing is just awful. That poor family.