oh my days it's Dizzee freestyling over Skreams' 'Request Line'.
Posted by Blackdown at 11:48 am 12 comments: 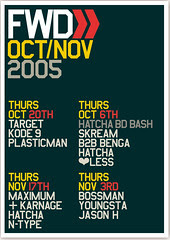 Jammer's tipping point?
Posted by Blackdown at 9:53 am 4 comments: 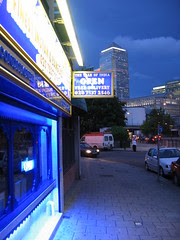 Interesting to see The Commission for Racial Equality’s head Trevor Phillips speaking out against the threat of ghettos. Is it me, or is Phillips the only person in the UK capable of making such warning with such impact? Because when Wiley says the same on pirate radio, no one with the power to affect change listens.

London’s a frustrating and mesmerising city, perhaps the only truly multicultural city in the UK. Thousands of different subcultures co-exist, piled on top, around, through, over and in-between each other. For many years architects and town planners have attempted to mix not segregate, hence why there are council estates just off wealthy areas like Upper Street or the heart of Dulwich.

Yet despite the geographical proximity and intense population density (over 7 million people in 50 square miles), in many ways total cultural isolation is a reality. It’s an endlessly confounding phenomenon. How can one group walk past another incalculable numbers of times a year, and gather no sense of the other’s values?

Canary Wharf and the City are east London’s wealthy business districts, two of the financial centres of the world and places where on a daily basis, sums of money are created, destroyed, flow in and flow out in mind numbing proportions. Commuters in their droves match that flow, washing in from Kent, Surrey, west London, north London, Hertfordshire and beyond.

Canary Wharf, one of only two real ‘sky scraper’ style developments in London, towers over some of the poorest parts of London. You can see it on the cover of Target’s Aim High 2 DVD, just minutes from Roll Deep’s ‘Whilehouse’ base. You can see it from Langden Park school playing fields in Bow, where as a pupil, Dizzee Rascal learnt Cubase while excluded from most other lessons. But just because Canary Wharf is visible from Bow, doesn’t mean Bow is visible from Canary Wharf.

If you asked any of the commuters coming in on those trains each morning about urban culture, you’d get blank looks. Physical proximity means nothing. Values, aspirations, opportunities, slang – there’s no exchange between these two groups. Two groups who essentially live on top of each other, yet are utterly oblivious to each other. Communities - upbringing and background based not location based - are in fact vast webs of reinforcing values, each physically overlaid on each other, yet seemingly seldom touching.

Lots of people grew up to, and still listen to, indie. If you go to those gigs, ignoring the obvious issues with musical formulism and tediously safe rituals, even in this city they are tediously monocultural. A thin slice of people of the same class and race, each reinforcing their overwhelming similarities.

Personally I think this is why I love urban music so much. Through it, a dialog between different cultures is at least possible, because it provides a shared language to bridge the divide. It creates some dialog and awareness, no matter how small.

No one 'on road' uses the word ‘politics’ in the Westminster sense. In grime if you want to hear ‘the news,’ you listen to Roll Deep on Rinse, surely grime’s Today Program. Trevor Phillips hasn’t made it to Rinse yet, instead he was on the other Today Program again this morning. His best point seemed to be that people need to focus on similarities not differences. I’d agree, though in this city, people need to focus on understanding those who are different to them a bit more than those who are similar too.
Posted by Blackdown at 9:54 pm 14 comments:

Hatcha with loads of new dubs.

who can see Crazy? Dubstep and grime going bar for bars.
Posted by Blackdown at 3:48 pm 3 comments:

Draw for the fork

Pitchfork column number 5. And what?
Posted by Blackdown at 9:03 pm 18 comments:

all about joe nice rocking the Rocky towel and deep L Wiz dubs. shame he didnt play phil collin's 'in the air tonight' like he threatened to.

all about mala's 'new life' and 'anti war dub.'
bigup Coki 'doesnt dj' DMZ for taking to the decks.

can't forget Skreams Ancient Memories remix. ave' some of that!
Posted by Blackdown at 3:59 pm 12 comments: