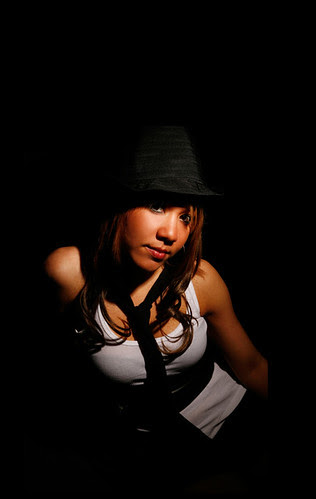 For the reasons I’ve outlined in the Mavado post below, namely that dubstep’s dark aethetic has started to feel constrictive and oppressive, I’ve found myself listening to as much funky as I can find recently, as well as the usual vocal grime, dancehall and desi.

Up until now this funky fever has been fuelled by the infectious enthusiasm for the scene I contracted interviewing Supa D, Soulja and Geeneus last year, but if I’m honest while I was curious, I wasn’t gripped by the sounds I was encountering. The Supa D Rinse mix CD will no doubt be looked on as some kind of “first” in the genre but it still doesn’t move me like grime.

But some kind of threshold was crossed for me a few weeks back when a Dissensus user posted a link to a Marcus Nasty set on Déjà Vu.

As the head of the Nasty Crew, Marcus is infamous in grime, but he’s also well known for his funky DJing. Unlike the Supa D mix CD, his set is hosted by two MCs, Shantie and Quincy, which is an essential element of the experience for me. Also there’s loads of rewinds, providing essential dynamic range, in interesting opposition to some of the suggestions Supa and Gee made about the lack of reloads in funky.

While there are the first hints of a few grimey funky tunes (gunky? Haha…) at the end of this mix, for me, the killer cut on this mix is “Do You Mind” by Crazy Cousinz. It comes at the beginning of the second section, the singer, Kyla, unleashing lyrical seduction.

The ear strains to this line. What exactly is she saying?

The whole night what?

There’s something Loefah, the master of reduction and minimalism, said in interview a few years ago: "The way I see it, space is just as much of an instrument as a kick or a snare."

Uh oh. Wait a minute. Did she just say…

“Would you mind if I f… the whole night?”

Dirty Canvas and Why Not? 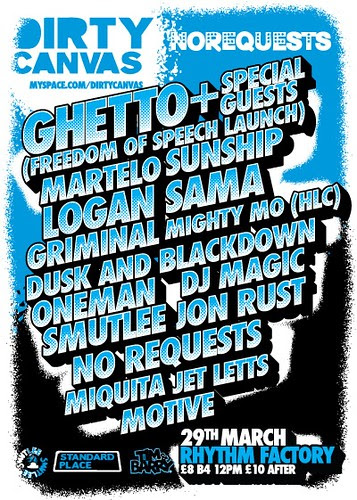 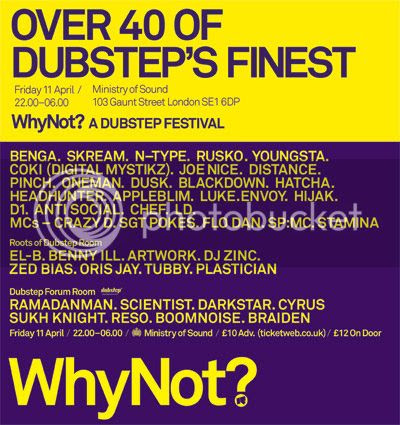 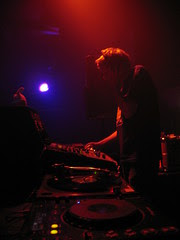 If you pretty much single handedly popularise a genres’ name, like the Dubstep Allstars mix CD series did, then you really need to come correct. And while the first edition is absolutely peerless (Hatcha’s), the second a reminder of a beautiful time (Youngsta’s) and the third brave and experimental, if a little emotionally tempered (Kode9 and Spaceape’s), the recent two volumes of the Dubstep Allstars series haven’t hit the spot for me.

So I’m really excited to be able to say that Volume 6, mixed by Appleblim, is sick.

While many people might have rushed, the Bristol DJ took his time perfecting the mix and it paid off. Instead of unleashing a raft of upfront beats (exciting in the short term, risky in the long term) he condensed the essence of the sound he’s developed and pioneered and provided its definitive document.

Anyway, I fully put all those reservations aside with Appleblim’s mix. It’s the perfect blend of groove and drops, tech and swing, Jamaica and Berlin, with a touch of Bristol jungle and NY diva house.

The latter, as manifested in Pinch’s album cut ft. Yolanda, “Get Up,” symbolises what works so well about Dubstep Allstars 6.

Firstly the mixing, which sounds live but is flawless. Secondly the selection is glorious: tried, tested cuts yet of a time (now) in harmony with each other. Thirdly the arrangement: “Get Up” provides an early peak, from which the mix really begins to flow. Yet not until Martyn’s “Broken Hearts remix” does it regain such ecstasy. Finally there’s the attention to detail, like the blissful moment when Appleblim key-mixes out of “Get Up” with 2562’s “Moog Dub.”

This mix is bigger than the Goodyear Blim-p.
Posted by Blackdown at 12:48 am 16 comments: 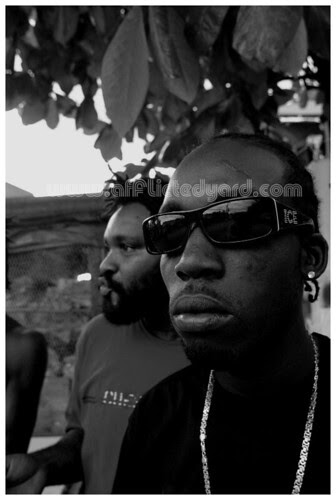 No tune has loomed over 2008 for me more than Mavado’s “On the Rock” on Baby G’s “Mission” Rhythm. Now, three months in I’m hardly breaking news on how big this tune is: the tune’s just so incredible I feel the need to publicly declare my total infatuation.

Darkness was once dubstep’s defining characteristic: UK garage but dark, hence “new dark swing” or “dark garage.” Yet as an aesthetic, it’s getting close to becoming stifling and dull. Add in an unnecessary reliance on instrumentalism too and things are getting oppressive. Right now in dubs I’m looking for light, colour, intensity. Not that sweet, sacharrine or (sonically) lite would ever cut it either, but there’s a twilight between day and night, dark and light, vocal and instrumental, happy and sad, sweet and sour that is the magical balance I crave.

“On the Rock” has many of those qualities and more, and I guess it’s symbolic of a craving I have for more vocal, emotive, colourful music right now.

The backstory to “On the Rock” is that Mavado’s birthday party last year got raided by the Jamaican police and soldiers in helicopters. Angry, he turned to gospel to express his frustration. The result is something even the addition of Jay-Z bars can’t improve.

Call it twilight, magical balance or dynamic tension, I’ve been drawn to Mavado since I first heard ”Amazing Grace” last year. What’s so remarkable about him is the sweetness of his voice and the bitterness of his message. No one else could sing about “[bone] marrow flying” and make it sound so intense.

While I haven’t felt this strong about a dancehall voice since Sizzla’s, in part Mavado reminds me of arguably my favourite house album, Romanthony’s “Romanworld”. Roman too sings with the anguish of someone who the whole world has forsaken, especially on “The Wanderer,” which like “On the Rock” is most spine-tingling when it’s a naked accappella.

Mavado too sounds scorned and forsaken, ripping his heart out and showing it to the world:

· Download “On the Rock" from the mighty Heatwave’s blog.
Posted by Blackdown at 12:41 am 6 comments:

Due to an unfortunate pre-match flu-based injury, sustained in the warm up, Appleblim has had to be subbed from the starting line up for tomorrow's FWD>>.

In an exciting, last minute turn up for the books I will be taking my tracksuit off, doing some lunges and leaping into some quite frankly unwise sliding tackles tomorrow night at Plastic People. I will be joining El-B in goal, D1 running the midfield and Mr Cheffal up front.

Come along if you can: last time was a nice little run out.
Posted by Blackdown at 8:06 pm 8 comments:

This month's ramblings on Pitchfork about Cotti, Skepta, Spyro, Rapid and funky. All roads lead to funky right now... which is better that than deadout midrange riffage. Aaaaaanyway...
Posted by Blackdown at 2:10 pm 4 comments:

So, I don't really care too much what Prince Harry's been up to but I do care about the politics in Afghanistan. Reading the reports of his duty, I couldn't help looking up where he's been.

Though Yahoo! maps seems to throw up some quite different colours and textures.

Funny thing is, doing a search on Flickr for Garmsir leads you to peer into the life of this guy who seems to like light bulbs, bullets and mountains. He seems be exploring a cave somewhere... damn, I wish I knew where in the world he was.
Posted by Blackdown at 1:01 am 8 comments:

Dubstep on the cover of XLR8R

Dubstep's taken over this month's XLR8R magazine. Check the cover feature for my feature on Skream and George Infinite's photos.

I first interviewed Benga and Skream for Mixmag way back in 2002/03: I don't think anyone'd got to them before that. I did them again for Deuce after that, but it was my interview with Skream in 2005 that came to mind most when speaking to him again: the comparisons given the growth of the scene and his career personally, are amazing. (Just check how many gigs he has!).

So the interview mostly followed this path, and how dubstep has gone from a small tight knit community to a global movement, as witnessed by the 1300 or so people who came to DMZ@Mass last night and Rinse and FWD>> @ The End last week.

Anyway, the magazine is available as a free pdf here (how does that business model work?). Thanks to Vivian for the opportunity.

PS: Mr 9 going on clever rocking a box on his head. Who would like to join my petition to get him to try and DJ with it on too. Now that really would take some skills... ;-)
Posted by Blackdown at 9:02 pm 5 comments: