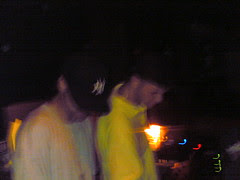 New Pitchfork column from me on funky house v grime and the return of El-B. That there column took about two weeks to write, trus. What with the epic packaging for The Roots of Dubstep - you'll know what I mean when you see it - it's been a busy month.

As for the photo above? El-B and Loefah in the booth at FWD>>. Lets call it "Martin's Moment II" (hold tight Infinite), the best FWD>> booth co-incidence since Wiley and Mala DMZ.

Next month my column will be co-written by Chantelle Fiddy and, back from retirement, Gutta. My normal drivel will be resumed in October. Also check Bleep/Road for Keysound 002. Watch this space for news on Keysound 003... this time there will be no long ting. 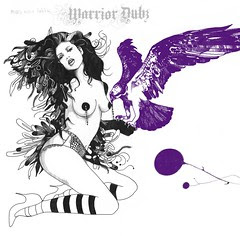 Mary Anne Hobbs’ Dubstep Warz show early this January left an unmistakable impression on the dubstep scene, bringing the bubbling scene to the boil and serving it up to a hungry audience. Ten months on, Mary Anne here exclusively unveils the logical extension of her show, a compilation of her own recipe. Check the tracklist and an in depth interview below.

Blackdown: Are you ever personally able to comprehend the reach and impact having a BBC Radio 1 show brings?

Mary Anne Hobbs: My feeling about the show is that it’s a bridge I build between a global audience so tenacious and hungry... and the pioneering artists and producers I adore.

In my minds eye, that bridge looks like it’s made from dirty rope stretched across some devastating crevasse in the Amazon jungle… other times, it looks like a heavenly constellation built out of burning stars … and then again, it can often look like a crazy twisted Dr Seuss cartoon.

I always get a rush from e-mail and MySpace messages from places like Greenland and Brazil, Chilli and Israel. That people in such far-flung locations have even stumbled upon the show, let alone taken time out to tell me how much it means to them, that makes my heart burst. Our regular listeners come in so many shapes... there’s a barber’s shop in New York that pipes a stream to their customers every day. A Royal Navy ship’s crew stationed up in the Arctic at the North Pole. A blind boy and his guide dog Murphy who haven’t missed a show in 7 years… the actor David Hyde Pierce who played Niles Crane in the TV sitcom Frazier, he’s a regular... so is Loefah.

On-line forums are so important to me… DJ Distance put a post up at dubstep forum about the Breezeblock Dubstep Warz special back in January. Five days after that show went to air there were 20,000 hits on the thread and 28 pages of responses from people saying it had changed their lives forever... 8 months on, I still get e-mail from all over the world about that show every day.

B: In many ways the music and media industries are ‘a man’s world’. How does this affect you personally and do you think this will ever change?

MAH: Why should gender matter? Surely a person should be judged solely on their ability to do a job... Passion, commitment, degrees of knowledge and the drive to deliver something genuinely valuable as a professional, lie deep within the fabric of an individual character, and as I see it, have nothing at all to do with gender. That said, let me just take a minute to big-up some of the seriously inspirational girls in my world: Sarah & Amy who run FWD>>, Tempa and Ammunition, grime queen Chantelle Fiddy, Melissa Bradshaw from Plan B magazine, Reju Sharma producer of Bobby Friction’s show on the BBC Asian Network, John Peel’s daughters Flossie & Danda and his wife Sheila, Georgie from drumzofthesouth and my riot-gals Steph, Leah, Charlotte Gemma and Sarah, DMZ simply do not have a party without ‘em up in the place ;)

B: Judging by the selection on your show you’re pretty eclectic in your selection within a remit of dark, underground music. Is this a deliberate policy to avoid a narrow, purist agenda?

MAH: Here, I would quote Woody Allen from the film Annie Hall: “A relationship, I think, is like a shark… it has to constantly move forward or it dies”... and Artist Damian Hurst is the only man I know who’s done anything real with a dead shark. The Breezeblock has been 8 years on-air... The core axis is made up of dark electronic music in all forms, but it’s a show that exists without boundaries or prejudices of any kind. I spend almost all my time just looking for something total elemental. Something that will leave us all slack-jawed and drooling.

John Peel is my greatest hero. His playlist was boundless. I simply do not know how he found the time for all the writing he did, the DJing, TV, Radio 4 and World Service broadcasting and to raise four incredible children simultaneously. I can’t remember listening to a single show of John’s without hearing the most extraordinary and arresting pieces music he’d found, the like of which I will never encounter again. In this life or the next. 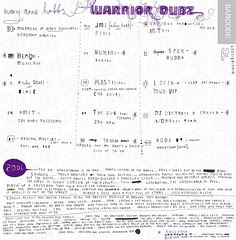 B: You’ve got a background in metal as well as underground urban/electronic music. Are these strands just different parts of your (musical) life or do you see some kind of core overlap or correlation between what appeals to you about them?

MAH: Remember, I am the girl who was so profoundly influenced by a snap shot of Metallica, I sold all my worldly goods one afternoon and bought a one-way ticket to the West Coast of America, where I lived in a garden shed for a year and went to investigate...

Seriously though, the ghetto spirit and energy that drives a truly brilliant piece of music will touch you at the same emotional level…no matter what genre that artist may operate in.

I guess there are very obvious parallels between, say for example, metal and dark drum & bass. Mike Davies who hosts the Radio 1 Rock Show and punk show the Lock Up would agree with me. He has also been Fabio & Grooverider’s producer at Radio 1 for 5 years!

DJ Distance and Jamie Vex’d are big metal fans too, and you can hear those influences, principally a storm-chasers sense of drama, twisted into their work…

There are also artists who are masters of drawing down the concentrated power of metal... compressing, warping and pressurising it, and then re-applying it in other musical fields. Mike Patton’s work, for example, with Fantomas, Mr Bungle, Tomohawk, Bjork and Exceutioners never fails to leave me breathless... I would love to hear him do something with Burial.

B: I’m currently in love with Cassie’s “Me & U” (Badboy). What’s the most overtly poppy track you’ve truly loved – perhaps even from the playlist – yet haven’t played on your show and why?

MAH: This week: Pharrell & Kanye West - ‘Number One’ (Virgin)... a proper honey-dripper... so very sweet... I’m toying with playing on the Breezeblock it right now... I’d love to hear Darqwan remix it...

B: People just take it as a given now that you can’t hear an instrumental tune like Digital Mystikz’ “Anti War Dub” played on, say, the breakfast show. The Radio 1 playlist meetings have a massive influence on UK mainstream music sales. Can you ever envision a time when the playlist would be consistently open to underground/independent, instrumental or non-PR backed music?

MAH: The playlist is always open to crossover tunes… Last year, for the Breezeblock it was Pendulum - underground drum & bass producers who delivered an instrumental titled ‘Slam’ on the Breakbeat Kaos label. Radio 1 playlisting happened after 18 months consistent support from me (admittedly for earlier and much darker beats), also from Fabio & Grooverider and latterly Zane Lowe… and, crucially, after Pendulum came with a pop record with a hook as big as Brazil.

B: One of your other passions seems to be motorcycling, surely a sport who’s key drug is speed, um... in the velocity sense of course. Dubstep, grime, alt hip hop etc – many of the styles you play on your show eschew any sense of ‘rushing.’ Is momentum important to you, both musically and physically?

MAH: That’s a very astute question... I’m a thrill seeker for real. I ran away to London at 18 to live on a car park in a bus with a hard rock band… moved into a shed in Hollywood to write about the dark underbelly of the LA scene at 21... chased down Ice-T at the height of the ‘Cop Killer’ controversy for NME, when he feared assassination. Moved undercover in Soho sex clubs and with drug dealers to the stars for Loaded magazine. Filmed with warrior biker gangs in Russia, Japan, USA and India for my TV show ‘Mary Anne’s Bikes’ which was broadcast to 120 million people worldwide by the BBC... and in 2006 I build the Breezeblock for Radio 1... I say, charge at your dreams and never look back.

B: For music headz, the power a truly great piece of music can have on you is profound. Do you think it’s possible to maintain this engagement with music throughout your whole life?

MAH: Yes... what is life without music? To me it would be as melancholy and meaningless as the Shipping Forecast…

B: Given they’re culturally very different, what do you think about the interaction between the grime and electronica scenes?

MAH: Very healthy. Check Virus Syndicate’s new night ‘Grunk’ up at Herbal on the third Thursday every month. You’ll find electronic heathens such as Cursor Minor on the same stage as the Manchester grime kru. Skepta and JME missed their slot with Plastician up at the Tyke night at Rhythm Factory just recently, so they got up to spit with Vex’d instead - devastating set... The FWD>> kru are creating real opportunities every week now for the grime and dubstep scenes to move in harmony... The Bug and Flowdan have just recorded a dazzling exclusive for my new album ‘Warrior Dubz’ titled ‘Jah War'... and my boy Plastician is coming loaded with the rudest melt of grime and dubstep to his Radio 1 Residency show...

B: As a BBC broadcaster, is it more important to maintain audience figures or reach a diverse or uncatered-for audience?

MAH: Just had the official new RAJAR listening figures today from Radio 1 and word is we are UP UP UP!! So I’m buzzing, and I hope the management will be too! Even though we are truly global and we continue to grow and to flourish, the degrees of separation between everyone involved with the show, the artists, the fans and myself are so very small, that we feel like a family … that is at the heart of my agenda… it’s a family thing for real.

B: In interviews, do you long for more trivial questions? ;)

MAH: lol! My favourite ice-cream is an old-skool whippy, single cone, no flake ;)

Mary Anne Hobbs’ show moves to a Thursday night 2am-4am on September 28th and it will be simply titled Mary Anne Hobbs. If you can’t listen live you can rewind it any time for one week at www.bbc.co.uk/radio1/maryannehobbs/index.shtml click ‘listen again’

The Best of Newham Generals 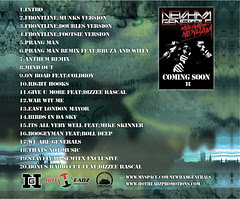 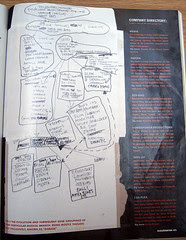 Back in the day, co-founder of Ammunition promotions, Tempa, Shelflife and Forward>> Neil Joliffe - the man who coined the word 'dubstep' - drew a diagram to explain a little 'istory. Three years on from April 2003 and the page provides a unique document of a time when garage was in flux and dubstep was begining to find its own identity. Recognise.
Posted by Blackdown at 9:48 pm 12 comments: