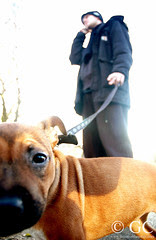 Loefah and Vinton
Originally uploaded by infinite.
Dubstep 2005 according to George Infinite

2006 may well be upon us but it would be hard to embrace the new year without looking at 2005, a year in which dubstep and grime has sparked a new fire to warm British arts.

The music is innovative and pioneering and as an increasing number of journalists, bloggers and labels are noticing, is a true reflection of the UK's city dwellers- thoroughly multicultural, multitalented and striving to break free from the industry's usual restricted way of doing things.

2005 has seen producers increasingly finding new ways to represent themselves in which their music and principles will not be compromised. Pirate Stations such as Rinse are undoubtedly still alive and kicking despite the governments eagerness to lock them down and dubplate and vinyl now works hand in hand with new ways of using the digital technology that our generation has grown up with. 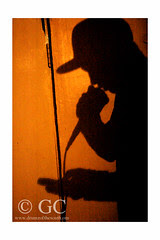 Through instant messaging, blogging, mp3's, forums and phones music lovers around the world have been able to get involved with London's freshest scenes as they unfold and I've been privileged to be just one of many inspired by the abundance of fresh music that the dubstep scene has produced this year.

I'm certain that in a few years to come, 2005 will be known as DMZ's year. I've been to a good few parties over the years but for me the first rave DMZ rave in March will live with me forever. Through Croydon's underground connections, it was Digital Mystikz, Loefah, Pokes and the Big Apple crew that truly introduced me to dubstep - Mala's B was the tune that had me hooked alongside the Dubstep Allstars vol 1 in 2004 so hearing these tunes on a proppa sound system in the heart of South London was more than anyone could ask for.

I'm also particularly fond of DMZ raves because not only have they granted a home sweet home to the sounds of dubstep present but have also paid respect to the earlier sounds of dubstep and it's dub, jungle, garage and house roots as well as shining a much needed light on 2005's freshest talent that has included Joe Nice and Heny G amongst others. As for 05's DMZ releases.... ? Officer, Neverland, Root, Goat Stare and the constant rewinds they induce from Brixton to New York. Need I say more?

Vice Mag (say) they don't like us but we don't care, 2005 has been a great year for bloggers. Big ups to Blackdown, Chantelle, Distinction, Gutterbreakz, Prancehall, Alt-dot, DQ Dubway and all the passionate wordsmiths and documenters.

Outside of London, Bristol is my favourite UK city. With the fresh
air, comes fresh music from the likes of Pinch and his Subloaded night, the second night held at the Black Swan playing host to Digital Mystikz, Kode9, Vex'd, and ThinKing amongst others. The night was particularly memorable for the crowd which were a happy mix of students, london bods and drum n bass heads. This is also the rave in which I captured two of my favourite shots of the year- this one of Skream sitting on the stage on which Mala and Loefah played b2b with Sgt Pokes and dubstep soulja Kris Beard / Engine Room holding his fists up in salute of the latest Coki riddim, which at the time(if my memory is correct !) was Haunted.

Before the days of the ever growing dubstep forum was dubplate.net - a somewhat low-key underground music site which amidst the aggy rhymes from grime youngers on the grime forum was pretty much the home and message centre for fwd regulars and interested overseas heads. Here you'd find Kode9 and Loefah amongst others battlin each other with crap photo-shop manipulation ping-pong. Bloggers have been cussed for featuring too many in jokes, but how can I help it when some of them were as ridiculous as this? 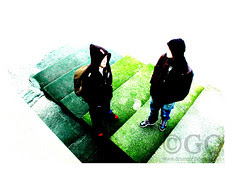 Their tunes are purely haunting- I love their dark and sinister vibe because they always contain some kind of beauty within them. Degenerate is one of my favourite releases of this year and I've already talked about this a lot on the blog but the Knowledge remix tore my head apart. I was really interested to hear that they get a lot of their inspiration from cycling down the River Thames.

Like few producers Shackleton, Appleblim have managed to break through genres and styles. Their first Skull Disco party was born last year- the September edition being particularly memorable due to Shackleton's heavy ragga styles and the introduction of The Evil Mastermind alongside one of the most interesting and amusing MC's I've seen this year (the long-bearded, tall hat wearing guy). I still don't know his name, but he made me giggle. Tunes wise I've been loving Shackleton's Limb by Limb remix which I first heard whilst driving at sunrise on the way to Gatwick and Appleblim's beautifully industrial Girder Dub

2005 can't be discussed without mentioning these two. Hailing from Croydon, Skream and Chef have been around since day dot despite their young ages and have caused mayhem pon many a dancefloor and airwave this year.

Chef known primarily as a DJ (but someone who I hear will be working on beats in 2006), has had a hell of a lot of good sets this year- he and Chef b2b at DMZ was a mighty occasion, Chef's classic Big Apple and DMZ contrasting with Skreams infinite bag of his own fresh dubs that made for a wicked hour and a half of energy. Skream's Midnight Request Line is to my knowledge the most successful dubstep tune to date, embraced by DJ's and MC's from many genres. I was lucky enough to be at Forward>> when Mala dropped it to an audience that included Wiley, Jammer and Skepta back in April.

These two again hail from the Norwood-Croydon ends. Cyrus has been responsible for some killa dubs this year including Haunted remix and Prayer and as has N-Type who produced one of my favourite tunes of the year, Way of the Dub. N-Type also managed to infiltrate the tourist massive with his creation of this Autumn's Urban Croquet event which saw various DJ's take to the decks in the sports wear section at Harrods. How can I forget getting slightly merry on champagne, Chef taking photos of me in the bikini rail before falling on my arse in front of loads of people. I'm sure it's a memory that will stay with a few of the shoppers too.

Whilst 2002's Dubstep Allstars Vol 1 mixed by Hatcha meant awe and wonder for a newcomer to the sound as I was back then, Youngsta's Vol 2 meant seeing two of my own Forward>> photos in print. It also gave me the opportunity to interview the mysterious Youngsta, whose allstars mix was a perfect profile of some of my favourite tunes of the year - Moonsoon remix, Request Line, I, Neverland, 28 grams and I Believe.

Watch out for Dubstep Allstars Vol3 mixed by Kode9 and feat. Space Ape. Set to drop in the New Year.

this is the best one so far. Georgina's passion knows no bounds!
And thanks for the mention, it means a lot

yeah really good piece, props to infinite and great pics. Keep up the excellent work and thanks also for the mention.