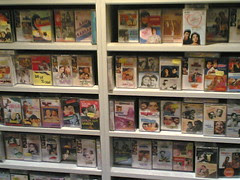 It’s been on my to-do list all Christmas: visit that subcontinental music shop in Brick Lane. It’s got so many tapes in the window, by artists I couldn’t even read the names of let alone have known who they’re by, that I just had to pay it a visit.

Late yesterday afternoon a mate and I found ourselves down in Brick Lane so we headed towards it. With rain beginning to fall, we passed the Truman Brewery and I looked up to the window where the old Ammunition offices used to be. It occurred to me that was probably the room where the word dubstep was invented.

We headed up to the shop, further up on the right hand side. We stepped in out of the rain and immediately began looking at the amazing collection of tapes.

“Can I help you?” asked the shop assistant, kind of gruffly.

Brick Lane might be famous for its “Indian” curry, but it’s predominantly a Bangladeshi area. From this, and the shop assistant’s appearance, it was fair to guess he was Muslim.

“We’re just looking at the music tapes…” I replied.

At first I thought he meant there weren’t any tapes, which clearly wasn’t true. Instead he meant they weren’t music tapes. They were devotional tapes and from his tone, I could tell we weren’t welcome to buy them. I left the shop a bit disappointed that I’d not found any new music, but pleased I hadn’t bought something sacred to Muslims which if subsequently sampled or played inappropriately, might cause deep offence.

My mate had another idea. He lives in Tooting and had bought some Indian music for his Sri Lankan parents. We could try again there, so we headed from east to south.

The place where my mate had bought a Lata Mangeshkar compilation for his dad didn’t prove that useful, which is often – when you don’t know what you’re looking for – a function of how friendly the shop owners are. We headed off to another place I’d seen on the other side of the road. It was exactly what we’d been looking for:

Ohmydays: Raj Deep Video’s was a veritable treasure trove. My pupils dilated to take in the sheer expanse of new, unknown CDs, DVDs and most amusingly, tapes. Thousands of tapes. 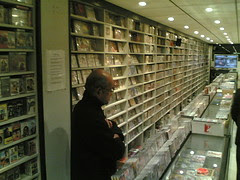 We began to look around, over the counters at the sea of new music in front of us. Although Tooting is a predominantly Muslim area - “Eid is much bigger than Diwali” mentioned my mate – it became quickly apparent that this was a Hindu shop and more specifically, a Bollywood specialist. It also had one other great asset: a friendly and enthusiastic owner who was willing to put up with inane questions from a lanky blogger who didn’t quite know what he was looking for but was enthusiastic all the same.

I started asking general questions, to work out what they had on offer. One wall was Bollywood DVDs only. The other, music, in tape and CD form, mostly from Bollywood films. Some were grouped by artist. I recognised Lata Mangeshkar and her sister, Asha Bhosle, which I mentioned. This seemed to break the ice. “You know Lata has recorded over 70,000 songs,” said the owner.

Suddenly we were getting somewhere. He showed me the older, classical section, which was tucked away at the back. The front had up to date Bollywood stuff, with the odd “DJ remix” collection too. He didn’t seem to have many Qawwali’s. He also assured me that tapes where a dying format, which made me laugh. “I know,” I said to him, “you’re the one with ten thousand tapes behind you!” He laughed back: “yes, but they’re already paid for.” 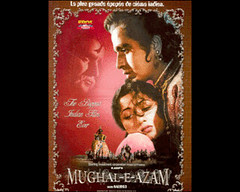 I was finding it hard what to choose. The selection was overwhelming. But then the owner started to talk about ‘60s Bollywood. “This is the greatest film ever made of all time,” he enthused, pulling out the soundtrack to Mughal-e-Azam. The CD came in a gold box and had “The Biggest Indian Film Ever” written on it. “It would take £200 million pounds to make this film today,” he added. “You can listen to the songs over and over, same with these ones too.” He pulled out the double CD of Yaadon Ki Baaraat and Hum Kisise Kum Naheen, both scored by RD Burman. “He’s the best composer,” explained the shop owner. He also got out another double CD, Kaala Patthar and Doosara Aadmi. I couldn’t help but ask if he had the soundtrack to Sholay, after the dubstep stone cold classic by Goldspot and Benny Ill. Of course, our man did.

I bought them all and some tabla tapes for £2 and left the shop a happy man. The other assistants were happy too – my guide had put on the DVD of Kaala Patthar to impress on us how good it was and how great the live orchestras that they don’t use now-a-days were, and the assistants were watching it again for the umpteenth time. 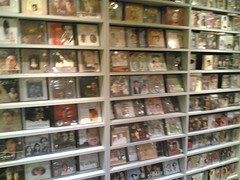 Leaving the shop left me thinking about two things. Firstly on the importance of recommendation. There were tens if not hundreds of thousands of releases in that shop. But without the owners obvious passion for four or five greats, I might have left empty handed or with some third rate also ran CD.

Secondly I wondered about distribution and the power it has on our listening tastes. As big as Raj Deep Video’s selection was, it could have fitted into one corner of HMV Oxford Street. You cant get half those titles in HMV (HMV have the DVD but not the CD it looks like, but then again this is the most famous Bollywood film apparently…), most probably because they’re not distributed to them. The result is they don’t sell many so they don’t reach a wider audience. Distribution matters. So does going that extra mile for new music.
Posted by Blackdown at 5:24 pm

you MUST see the movie Sholay though. over and above the music. I believe it's one of the greatest things I've ever seen


If you are interested in good things to sink your teeth into well here is an invitation to wrap your ears around…. something sweet….hot and fresh that is just waiting to be tried and tasted! JALEBI Music is just what your audio taste buds need to perk up and enjoy a good earful of appetizing music with our exciting blend of mouth-watering genre-busting JALEBI Music tunes!

But I haven’t introduced myself yet! Pardon!

Namaste! Hare Krsna! My name is Shirley Marie Bradby and I am the lead singer in a three member World Beat / Fusion with influences from traditional Indian music, soul, blues, gospel and modern musical technology. People often compare us to Jai Uttal …but our music has somewhat more of a dance-able feel!

As the lead singer I try to give the extra stimulating energy of soul, blues and gospel that moves people emotionally and spiritually….and that creates a really strong groove that gets people moving. And it works! Just check out the response of our JALEBI Music fans (from more than 100 countries!) on our website and on the various web pages below:

We are really excited about what has happened at BETA Records.com on our artist web page www.betarecords.com/jalebi where a great number of listeners have tasted our music and found it to be so good that they can't stop listening! In fact our song "Radha Govinda Kirtan" has been Number One since 22 October 2006 and we currently hold six other positions on the BETA Records World Chart!!!

Here is the link:
www.betarecords.com/openframeset.php?content=/charts.php

(Please scroll down to the bottom of the BETA Record web page to see the World Chart. Thank you!)

So this is an invitation to check out our music and just for visiting our web sites you will be entitled to a FREE JALEBI Music MP3 of your choice! Just sign our GUESTBOOK on our official website and I will send you your free MP3!

Hoping to hear from you soon……. so that I can send you your favorite JALEBI Music tune!

Before closing I would also like to take this opportunity to wish you and your family the very best during the coming New Year…….and always! Take care!

Thank you for your kind and generous attention! :)

I apologise, but, in my opinion, you commit an error. Let's discuss. Write to me in PM, we will communicate.