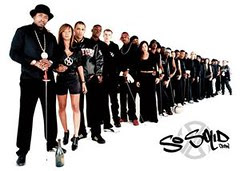 As if by magic, So Solid reappeared this week, on Logan’s Kiss show, causing what felt like a strange temporal aberration, where past and present were neatly aligned for comparison.

It’s been six years since So Solid exploded onto the UK mainstream, during which grime – a genre which they must take some credit for laying the foundations – has exploded and somewhat contracted. What made Megaman’s interview on Logan’s show so mesmerising was that he talked like nothing had changed, like Wiley and Dizzee hadn't unleashed a whole new, uniquely UK sound.

I interviewed a whole bunch of So Solid for The Face as they collected trophies with Ms Dynamite at the ill-fated UK Garage awards in Brixton. But there are few people I’ve encountered in urban music who come across as confidently as Megaman did on air.

The certainty in his voice, in his sense of purpose, the scope So Solid’s original ambition, was staggering, as he ran off lists of seven figure label deals, six figure video budgets, massive album and publishing deals that So Solid had entered into. How things have changed in six years.


According to Megaman, So Solid’s first four videos cost £68k, £168k, £256k and £368k respectively. Their two album deals were £500k each, with Lisa Maffia and Asher D’s costing £350k each, and Romeo and JD £210k apiece. Megaman’s label deal with Independente was worth £1m, where he signed affiliates Cream Cartel. That’s £3.98m spent by the labels on So Solid (not including the EMI publishing deal). Cream Cartel didn’t release more than a single.


You just don’t hear record companies talking like that anymore, with their cheque books anyway. No UK urban acts gets £300,000 for their whole deal, let alone for their video these days – as Megaman pointed out. In fact, people aren’t getting deals at all.

But you also don’t hear MCs talking like that anymore. Mega’s talk is strictly business. Ghetto – to pick but one of many MC – is strickly war. When grime MCs talk about “making moves” they’re talking about jumping in the Clio and “rolling on a man,” not heading down to Companies House to register their business.

Wiley, like many of the grime MCs, regularly talks about paper chasing, but apart from the Roll Deep/Relentless deal, he seems to be living day to day, or mix CD to UKrecordshop.com in the car boot, to be precise. People praise JME because he’s put out more than one underground mix CD a month – and that’s supposed to be progress for the grime industry. Bashy laughed on Logan’s show the other week how Scorcher was simply dashing the CDs into the back of his car without even boxing them. He also said that he simply had to stop MCing before “Chupa Chups" because the music wasn’t funding it. And while I don’t know what Bashy did in his down time, if many other MCs bars are to be believed a lot of their MC careers are being funded by drug money – hardly a sustainable music industry in action, tragically.

Contrast this with Mega’s, highly slick, CEO talk. He chats about hanging out in Monte Carlo and St Tropez, and how when he goes to the US, he’s not one to lurk in the shadows, he wants people to know he’s the top dog – quite a challenge since we all know there are some massive top dogs in the US rap game. 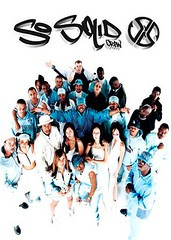 So on one hand we’ve got a guy who claims to be hanging around with the world elite in Monte Carlo and on the other, the scene that followed him full of MCs doing their own distribution in the back of a car, supporting their careers with drug money. And his business partner talks about Streetz is Watching being the biggest clothing line in the UK “urban-ly”(Um, but what about Nu Era or Akademiks not to mention Nike or Adidas?) and doing deals with Bathing Ape in Japan, but at the same time they have negative high street presence. Does this picture even add up?

The US rap influence always loomed large over So Solid, for better or worse. Clearly Mega thinks he’s in Damon Dash’s league, which would be great for urban music if he could create that kind of success, since a whole heap of UK artists need Dash-sized backing right now. But also listening back to So Solid’s actual music, it was so clearly the direct hybrid of UK garage and US rap, especially in the flows.

It’s almost like the scene had to go backwards from So Solid to Musical Mob’s “Pulse X” to cleanse the sound of its US influence and re-exert the UK direction, which is exactly what Dizzee and Wiley so amazingly did, in the years after the So Solid phenomenon imploded, by finding a unique UK voice that could artistically stand on it’s own two feet.

Something else so strikingly American, and Thatcherite too, is Mega’s vision to create upward social mobility for his community. It’s strictly business, self-build prosperity, with no mention of the state or education whatsoever: a clone of the American dream, or American MTV Cribs. It’s perhaps unsurprising he’d take this route since so much of grime’s community seems or acts marginalised from the benefits of mainstream society, (like for example higher education) and when Mega says of his peers “we don’t want to get caught up in the 9-5 rat race,” it’s a sentiment often heard in grime too.

The problem with betting your future a free market capitalist approach is that grime acts can’t seem to work together very well. So Solid weren’t so solid themselves either, given Mega’s come out of jail and others remain inside for murder. And all this talk of legitimate business doesn’t tally with them and their affiliate organisations’ heavy “road” reputation which, while I think it would be unwise to speculate on the rumours you always used to hear, wasn’t too legit at times.

It always seemed to be the case that the convergence of this lifestyle with mainstream/tabloid/media Britain, is what ended their meteoric rise and – after the incident at the Astoria for Romeo’s birthday bash that caused the Met to effectively ban all UK garage in West End clubs by the use of a blacklist – triggered the rise of grime by forcing MCs and producers onto pirate radio, a medium where they no longer had to make their audience dance.

But to return to Mega, at least he had or has business vision, unlike so many current MCs. One former foe of his – who remembers the legendary clash on Commander B’s Choice FM show? – is Dizzee, who’s new track “Stern Back” comes on like grime’s version of the KLF’s “The Manual.” He explains so much of the truths of the industry, like how to tone down the “road” talk when with mainstream journalists, how no one is above the tax man “not even you” and how houses are better investments than cars (you loose 30% of the value when you drive off the forecourt! That’s not an investment, that’s an expense). What this sense has in common with Mega’s sermon is that there’s a positive, or at least pretty much unheard message to the rest of the scene, unlike the single narrative so much of the rest of grime is suck on (“don’t fuck with us, we will kill you, before you shoot us etc”) right now. And with Mega, it’s coming from someone who’s taken it to a level 99% of all grime can only dream of now. Can these levels ever be regained in UK urban music? It’s hard to see from here...

interesting. to be honest.... no one knows who so solid are in the states, except for the small few grime, garage, 2step followers. none of their albums were ever released domestically.

funnily enough it wasn't the flow and lyrics which attracted me to so solid...

...it was the big bad ass beats and analogue bass noise behind them

that was pure UK steez...

...and yeah, I've always wondered whatever happened to oxide

there has to be a ballance between road commentary (and above all this has to be honest raw and confessional, and not tokenistic like it is with the majority of current MCs) and that talk of upwards mobility which, in my opinion, is pretty vital as well. Its certainly better than the unconsidered us-and-them attitude of most MCs. Truth is I haven't heard a UK MC voice in a while that has impressed me in terms of message or originality.
The exception is always Ruff Sqwad. I really enjoyed hearing them talk about leaving it all behind and living in a huge mansion with a wife and family on GNR2, but maybe that's becuase their aspirations, if somewhat American Dream, weren't the tacky diamond-studded stuff that you quote Mega as talking about. They've also got the war and road hype, the love songs, the cautionary tales... I believe in them and their ability to break thru past the cliches

why dyou say so solid were just the result of us rap and uk garage? i mean yeah they were but thats what grime is too! maybe what so solid were talking about was very US oriented about but you seem to be forgetting a lot of the themes and ideas in grime are from american rap today too. not that much has changed, although ok, maybe the flows today are more uk centric. but a lot of ideas lyrically and production wise are still quite indebted to american hip hop. and at least with so solid, you couldnt say their beats could ever be mistaken for a US hip hop beat.

"why dyou say so solid were just the result of us rap and uk garage? i mean yeah they were but thats what grime is too!"

you've missed half the picture though. look at early grime landmarks like wiley's 'ice rink' or 'eskimo' and add the strength of UK voice they brought and then compare them to US rap and there's so much more there than So Solid managed.

There's the dancehall influence, the techy/jungly sounds and the unique flows, distinct from UK rap, UKG chat or the US accents So Solid tried to immitate.