E1 and then some 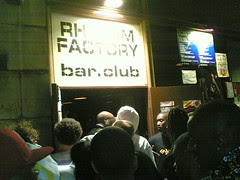 I reached Jammer’s launch party at Dirty Canvas last night. It was fucking heavy, the best grime night I’ve seen in a while.

Held out east at the Rhythm Factory on Whitechapel Road, even as I approached the queue, there was the sense that this was going to be a good night. The location’s ideal, further east than Shoreditch, it’s perfect for grime – and large bits of the grime community had certainly turned out in force. It wasn’t just the night’s crowd that excited (road but chilled, where were all the Hot Chip fans… though who cares?), it wasn’t bumping into Terror Danjah, fresh from remixing the Bladerunner soundtrack the night before. It wasn’t seeing Chantelle and friends.

No, it was probably because Jammer was standing there in the full Merkle Man outfit. Priceless. 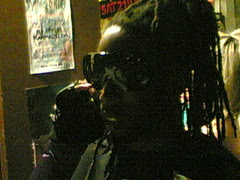 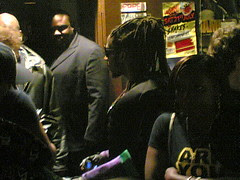 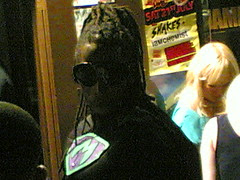 Fake pecks, huge glasses, tight spandex trousers and a green supercar: it was hilarious. But little topped the purple cape. It was a lot. Urkle!

Rhythm Factory, despite the worst, ear shredding, bassless soundsystem around, is a nice venue. The front room’s like an open-VIP space, a pub for chilling in. Through into the main room the stage dominates the view, and beyond that leads to the entrance of the back room. 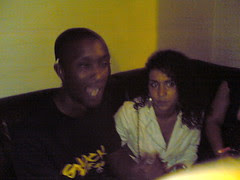 First pleasant surprise of the night was during the Aftershock showcase. Bruza was funny; the way he does the cockney knees-up while MCing is classic. But half way through, on came Ny (shown sitting together, above). I still listen to her mixtape weekly. While retaining an edge, it makes a refreshing change from the aggression of grime and is definitely a 2007 highlight. Turns out her appearance wasn’t planned, but respect for taking on a few songs acappella and pulling them off. Many more-famous r&b pop stars would have had their voices shown up. Not Ny.

I got to chat to her later on: it was nice to be able to convey my enthusiasm for her songs and she seemed really down to earth despite the life her open and heartfelt songs reveal she's lived. She’d played the Roskille festival recently, which sounded massive and we joked how her gran had read a review of her in Metro and loved it. Gwann grandma.

The night built with a set from Coki DMZ and Chef. With Jammer, Purple and Goodz vocals of his tunes, Coki currently seems to be the dubstep producer of choice for the grime scene, the way Skream was for a bit circa “Request Line.” It was great to see dubstep so accepted by the crowd too. There was a time when grime audiences wouldn’t have had a beat of it, but now there seems so much overlap between the scenes and audiences, that no one batted an eyelid. 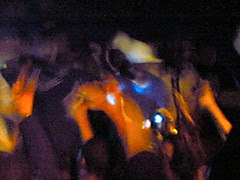 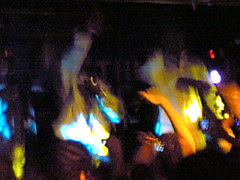 The climax of the night wasn’t one of the MCs trying to get Logan to dance, though that was fairly amusing, but the "Stage Show" medley. While essentially a one-bar percussive loop, it’s still Hypting.com forwardslash NASA backslash alot.

Footsie did his “rastaman pickney” bars and D Double is “ooh ooh” hooks. I’m always fascinated by the contrast between how stiff Double's body language is and how fluid his bars are when he spits. The relay built towards Tempa T’s verse, which if you haven’t heard it, is essentially him screaming at the top of his voice, “SWIIIIIIING, BANG ‘IIIIIIIM”. The energy levels are off the Richter.

Inevitably by this point there were about 40 MCs on a stage with room for 15. But I think it’s the measure of why Dirty Canvas was such a great night, that unlike old Sidewinder, say, there wasn’t people rushing the stage or this tense atmosphere of screwfaces and standoffs, both between the crowd and amongst the MCs. It was a proper grime crowd, out in east London, but everything was cool. Long live grime.

Posted by Blackdown at 7:06 pm

All very true, yes DC are doing huge things for a scene that I personally feel is dead. However, Jammer was supposed to be doing a mixtape launch. Not one track was performed from his forthcoming release. I believe Merkle Man was more interested in his entrance (or one of the three)and ensuring his guestlist of +67 was in tact.

Anyone with any sense would have used the opportunity as a showcase.

As for NY, she sounds terrible live, and completely killed the intense hype in progress before her arrival on stage.

You're right about the Stageshow riddim and Temps...the most hype I've seen for a year.

I just feel DC are clutching at straws. They're increasingly trying to throw the scene a bone and have gone through the 'grime roster' to the point that they've come full circle and are booking people they were booking at the start. While the night has progressed immensly in this time, the scene and the artists have done nothing.

Grime needs to fix-up look sharp. Which reminds me, don't even try ans start on Dizzee (not you Clark, I mean the haters)...you will only dream of a world tour and £6,000 per show (his rumoured income).