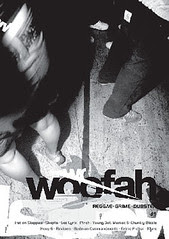 In an era of full on digital submersion, you've gotta commend people willing to swim against the tide. Woofah mag, is a real, in print-magazine dedicated to all the good shit in life (reggae, dancehall, jungle, garage, hip hop, grime, dubstep and bass) and none of the bad (adverts, very high pitched noises, people who write about music they don't burn for).

It's edited by John Eden and Paul Meme, aka Grievous Angel. The latter's just finished a ragga-techno-dubstep LP: clearly he's beyond such mere mortal necessities as "sleep."

It features writing from many fellow bloggers, including Mel Bradshaw, Simon Silverdollar, Dan Hancox, and amusingly some bloke called "Martin C" taking the piss out of Forward>> who isn't me. Seriously, it's not me. Photos come from George Infinite and illustrations from Woebot. In the game of UK blogger bingo, this baby's a full house.

I'm still in the process of reading it all, but it's a total joy so far. Here are some of my favourite quotes:

From the Badman Commandments feature by Gabriel Heatwave

"They had no idea about dubplates, but we did. We had a certain one telling 10 things about Unique 3 - why they were going to get buried - 'Unique 3 this, Unique 3 that'. Awww, fucking 'ell it was ruff!"

Dub's Mark Iration on clashing Unique 3 in Bradford during the bleep era.

Pinch on being asked which is better, Krome and Time or Photek

Woofah mag costs only £3: far cheaper than starting your own mag called Tweetah aimed at dogs, bats and all ultra sonic-hearing animals. Honest.
Posted by Blackdown at 12:36 am

thanks mate, that was really convincing...just ordered it...

don't think dubstep is really going against the grain, but the mag looks good nonetheless...

um, the anti-grain reference was about making an actual physical magazine rather than an online mag, not dubstep itself but anyway...

Nice article, I saw an ad for this magazine and will be ordering asap...

I have just received it today, it's brilliant. Can't wait for the second one.

(I love the idea of a physical magazine, by the way)

I didn't build Woofah, that was Paul Meme and John Eden, but I'm glad you got a copy. Bigup for supporting.

I know, I know, but I needed to express my enthusiasm somewhere, hahaha

Will you collaborate with them in the future?

"Will you collaborate with them in the future?"

That's the plan, I just need to think of a feature idea I feel strongly enough about...