I recently spent two weeks on holiday in Thailand. Time away from a PC, a mobile, the internet, newspapers, four email accounts and three types of IM was good for my brain, stress levels and my book intake. This is the first in a series of short pieces inspired by my time away… 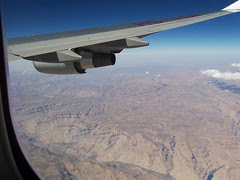 Around three hours into the flight, maybe four, I looked out the window. Dust. Nothing but dust, over hills and gullies, stretched out beneath me for hundreds of miles. There were no trees, no plants, no houses: nothing but stone mountains shaped by wind, water and tectonic forces. This had to be Afghanistan. Maybe Uzbekistan. Um, or perhaps Turkmenistan.

Tiny tracks would cross ridges or enter entire mountain ranges. From above, I had a window into entire worlds.

Blame the news agenda but when you think of countries like Uzbekistan or Afghanistan this isn’t what you visualise. What is ‘top of mind’ when you recall a nation’s identity bares little correlation to the actual geography. just like, a recent conversation with a friend informed me, the Bollywood cliché representations of London (Piccadilly Circus, Big Ben…) bare little correlation to rows and rows of Victorian terraces or post-War housing you actually find. Think the “Notting Hill” view of London, or shocked US rap fans meeting Dizzee for the first time: “Y’all have black people in London…?”. “It’s not all red telephone boxes and Buckingham palace,” as Diz says.

So when you think Uzbekistan or Afghanistan, perhaps new militant groups like the IMU come to mind, or the Taliban – images and ideas all drawn from the information reductions of the Western media. But the contrast with the visual impression couldn’t be greater. By area, mostly what makes up this part of the world, is rock. Dry, empty, rock.

In “The Tipping Point” Malcolm Gladwell brings up the well known phenomenon, “six degrees of separation,” an idea that dates to a piece of research done on US citizens in the 1960s by Stanley Milgram. Looking down on to the bare rock peaks of Uzbekistan, I wonder how on earth this could apply here?

Stanley Milgram’s study involved people connecting people through their network of contacts from Omaha, Nebraska, US to Sharon, Massachusetts, US and it found on average, that the two groups could link through 6 connections. Yet crucially, both groups are in the US: they share a language, geography, a currency, free exchange of labour and the same local laws.

Does something approaching ‘six degrees’ really apply between the West and Uzbekistan? Perhaps it’s not unreasonable so say it doesn’t. But what about Uzbeks in London? Suddenly we’re now sharing a currency, geography, free exchange of labour and the same local laws. How many separate us degrees now?

Staring down from 11km above, I guess this was what my wonder reminded me of: the sense of amazement I’ve had over the last five years or so in London that how we can all share the same city, yet massive groups move geographically near each other yet are mutually culturally invisible, like the (rich) City workers who glide thirty feet up through (poor) Shadwell on the DLR to Canary Wharf.

“Ayo/I’m tired of using technology/why don’t you sit down in front of me..?”The invisibility of local groups is all the more amazing given the ubiquity and connectivity of modern technology. Simon Reynolds, in conversation with K Punk, has talked about the over-accessibility of culture in an internet era: “the web has extinguished the idea of a true underground. It’s too easy for anybody to find out anything now.” But how easy is it to find anyone? In cases like looking for connections between an UK blogger in a plane and an Uzbekistani tribesman, I don’t think Facebook is going to help.

Perhaps the ubiquity of technology in the West gives a perception of infinite connectivity? Instead, perhaps the internet contains dark matter, not in the physics sense, but regions of culture not lit up by the net, or parts of the net not mutually accessible, beyond the English language character barrier? Sure, you’d expect that as a function of poverty (manifested as the global digital divide), but yet the consequence of the perception of infinite connectivity might be a numbing, mutual reinforcement of viewpoints and worldviews. One that’s flawed by it’s limitations. 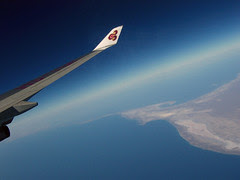 The plane sped on. The next time I looked out the window, rock had given away to water. Then, across sparkling waves, strode this one long, curved sandy spur like a raindrop running down a windscreen. Occasionally it split and you could see a vast bridge joining one dribble to another. Welcome to the Caspian Sea.

[PS: these aren't my Flickr images, my camera was full. But this is the same plane, the same flight company, the same side and part of the plane, the same two views I saw (Afghanistan/Uzbekistan and the Caspian Sea). Strange...]
Posted by Blackdown at 1:22 pm