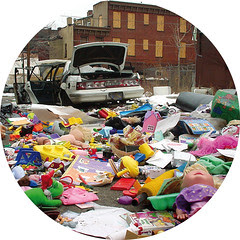 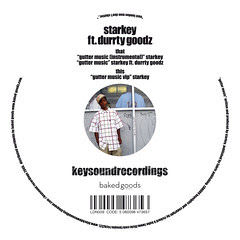 Ever since we started Keysound Recordings, I’ve strived to make the label art and music part of a whole. So when it came to illustrating Starkey’s “Gutter Music” 12”, the first release on the label not from London, I wanted something that both tied into the track and to Starkey’s home town, Philadelphia.

On the wonder that is Flickr, I found this shot by Richard B Kohn, a US-based photographer and I reached out to him. As Starkey’s “Gutter Music” 12” finally appears in shops, this is the story behind the striking images you see on the vinyl.

Blackdown: Can you tell me a bit about yourself as a photographer, when did you start?

Richard B Kohn: “As a person, I have been one who wanted to observe the world, especially the interaction of people in public settings as opposed let's say to sitting on a beach or exploring the ruins of Manchu Pichu. A natural extension is the photographic medium. At first the image becomes a souvenir, then refinements, technology, brings you to a level of sophistication as your technique matures in parallel to life experience.

I would now define my images as photo journalism concentrating on photo realism. Very few are genre based. My subject matter most often are urban street images, most involving live subjects interacting within their own comfort zone, really, I'm an observer of events. My concentration has been people at the margins of society, so many images reflect everyday situations within this strata.

The introduction of the digital image (over a decade now) significantly exploded the output possible for street photography. As long as I'm able and have the time, resources I will continue to wonder what interesting interaction I will have around the next corner.” 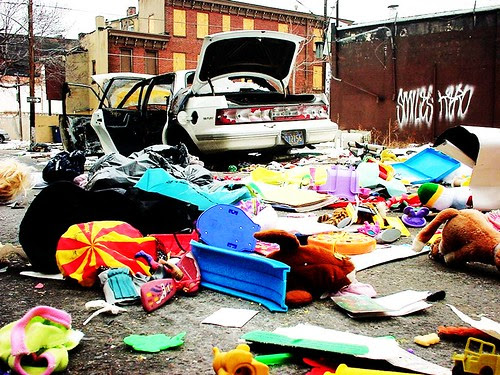 B: Can you tell me a bit about this day's shoot...

RBK: “The two images illustrated on the Starkey 12" were taken in Kensington, Philadelphia , just North of downtown. Since the late 1970's the neighborhood has deteriorated into a working class ghetto when many industrial factories closed, leave unskilled laborers without means of support.

I chose to shoot the abandoned stolen car, 2001, to illustrate the surrounding structures with the usually bonus of the scattered but colorful toys all surrounded by some fresh snow. 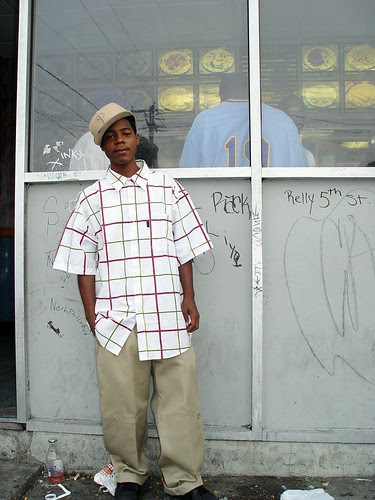 I came across the boy, 2007, while observing a Puerto Rican Independence day parade. As an African American, he was just watching on the sidewalk. I was attracted to his self-assured cockiness, clothing, as good subject, the cheap fast food establishment, even the litter gave this image the urban ghetto id.”

B: How did you come to find yourself in this part of Philadelphia?

RBK: “I actually found this part of Philadelphia by accident, when I was trying to drive to the city center on business. I became intrigued by the urban-ism, the overhead rail line, -the El-, the mix of people in the street - white, black, Hispanic - the overall dynamics and access to various characters, said, 'Shoot Me.'

Interestingly the neighborhood with its famous row houses, store front, old factory building's was on an economic comeback recently. The brick building behind the car in my photo now is a loft condo. The new realities of recent events might have slowed this comeback.

If you are interested in seeing Kensington illustrated during it's most depressed time, I recommend Eugene Richards's ‘Cocaine True, Cocaine Blue’.”

B: What did you enjoy and not enjoy about shooting there? What was it like?

RBK: “What do I enjoy, well, life. In most of American, the automobile rules, suburban shopping malls are everywhere. This atmosphere prevents casual interaction. The streets of NYC , a world capital are vibrant, Philly's main streets still have some of that urban edginess, but there is danger as well, drug dealings, shootings, prostitution, robberies...all the urban ills. One of my better shots highlights a well-known gruesome murder that made headlines nationwide a few years ago.” 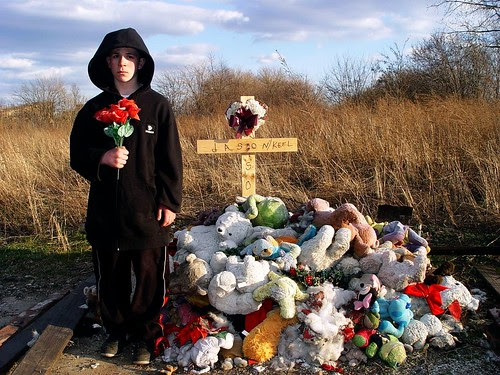 B: That shot is particularly striking. What have you been focusing on recently?

RBK: “I am lately meeting photographers from the East Coast that image UE or Urban Exploration. Most concentrate on structural ruins of the last century, such as hospitals, power stations, foundries, hospitals. I use these as props when I encounter subjects to shoot. Some fashion photography uses such locations as well.”

“I have had feedback from a number of sources on my images including the NY Times, various UK sources including the Belfast media. I have documented the lives of street children in Moscow. This same group was featured in a prize winning, Oscar nominated short documentary, The Children of Leningradsky, 2004. I just got feedback from video images from my subjects from 2 different Belfast shoots from 5 years ago. I may want to revisit the subject and do a yesterday and today follow-up. Photography does have it's rewards.

· Richard B Kohn has lots more amazing images of Philadelphia on Flickr. He also has images on Picturepush. Starkey’s Gutter Music ft Durrty Goodz is out now on Keysound Recordings.
Posted by Blackdown at 1:54 pm

Is this coming out as mp3 or flac?

Those are some great pictures! Thanks for the link.

great photos, but for starkey? he a chubby little suburban hipster kid, the Philly 'ghetto' photos come off as exploitive and silly.

it's reportage. show me exactly who got exploited again?

Nice pictures. Thank you for the link.

true, perhaps not so much exploitation, but a voyeuristic "animals in the zoo" type vybe happening; the outsiders gaze tinged with just a hint of pity.