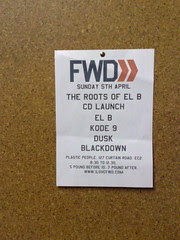 It was 24 hours ago but I'm still hyped and energised by an amazing Forward>> last night. It was so great to see El-B finally getting his props; so nuts to play alongside him - he was the man that made me want to produce. And while he's a bit busy these days, dialog with Kode9 have been a massive influence over this decade, so it was great to warm up for his mix of funky and, well, wot do u call it?

(Out to the guy shouting "play some dubstep" at Kode. Are you sure you really want to bait Mr Contrary? Foolish behaviour: don't make him draw for the Sun Ra. Update - fuck, turns out it was Corpsey, ah well at least we know it came from one of us.) 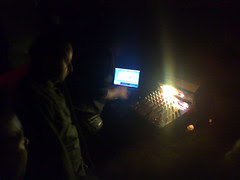 I'm so happy Forward>> is still the force it is and - thanks to Soulja - willing to take risks and lead rather than follow, so it was nuts to see a decendent of the mighty Alice Coltrane take to the decks. Yeah Kode's mate Mr Flying Lotus did an impromptu set, news of which broke on Sunday afternoon, only adding to the sense of anticipation of the evening. With Mr Lotus in the house, I love how the dots can be joined - speaking of which, it was nuts to see not just Benji B but the Theo fuckin' Parrish up in Forward, chilling by the stairs where Slimzee used to hang, back in the day. Speaking of a Rinse don, large bits of the night went out live on London's leading, look out for audio.

In retrospect our set seemed fun, though any DJ who says it isn't hyper intense being up there must be lying to you. But our rollage and 2step009 seemed to work, so I want to shout all the producers who made it possible: Kowton/Narcossist, Grievous Angel, Silkie, Sbtrkt, Burial and the swing don himself, Sully. Let's roll.
Posted by Blackdown at 8:29 pm

one day, hopefully sooner rather than later i will be in attendance...

...til then big up ya selves

loved the set, great fwd... any chance of a tracklist?

yo martin, really feeling the whole 2 step thing....but I really don't think anyone does it like TRG does it...sully comes close, obviously Burial is the father, but there's just *something* to that TRG back-and-forth...

anyone, thanks for promoting the sound! Looking FWD to more Narcossist tunes

TRG's a badman, we caned "Feel For U" for a year and we ask him for beats every month, but honestly he's not making 2step right now.

He doesn't seem to want to and you just gotta respect that, i find.

really? ...what would you call "Surreal" off the latest Tempa, or "They Know", or even his "Township Funk" remix? I'm going backwards through his discog, I mean maybe I'm just way off base...

Thanks for the kind words, and big up Blackdown for caning my stuff since day dot. To be honest, I think I've been stuck with the 2 step label because there weren't so many people doing it at the time (circa 2007). And I think I only have 1 single track that's genuinely 2step/garage (Move Dis).
The swing is not my main focus these days because what I look for in a tune goes way past thinking how to make a swung beat that doesn't sound like the one before. I'm still drawn to uptempo, polyrhythmic beats but what I'm looking for now is groove and function rather than form. I think El-B and Horsepower did a fine job putting out tunes that don't sound like their back cat for example. FWD is the only way, there, now I'm on topic too :)

groove and function rather than form?

Don't know if I made myself clear, but if it's swing for the sake of swing, I'd rather not go there. I see people bigging up 2steppy tunes just because they're 2steppy, and I'm afraid that while it's fresh and exciting, it will become just as formulated when producers aim solely for a pattern rather than a bigger idea. A lot of this is just theory tho so please don't take it very seriously :)

my fear, which hit me a year or so ago, is that the 2step drum patterns would be erradicated from dubstep altogether, which is why we went after it, in our productions, label and on radio.

it needs to be incubated, for dubstep's diversity's sake. hell, something brand new might even come out of it...

word, Blackdown. Relocate- "Too Moody to Swing" is the last great 2-stepper I heard. Sick!

everything that never happens, in all directions, spreading

I heard TRG said the same in person about only having made one 2step tune (nice to find out which one it is), but I guess it's all a question of definition. I agree with anon, in that in terms of dubstep, yes, they're all pretty 2step-y : )

when you say "turns out it was Corpsey, ah well at least we know it came from one of us" what do you mean by "one of us"?

headz, mandem, dubstep family... someone i know and has contributed to the scene rather than a random punter.