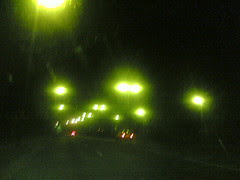 A funny thing happened to me last night.

So I’m driving Dusk home late last night from studio and we’re clipping over the flyover. Goodz’ “The Music” is blaring out and I’ve got goosebumps from how amazing it is, when the “no petrol” light comes on in the car.

So I drop Dusk off and head back towards Tottenham, the nearest likely place to fill up. After two laps of Tottenham Hale’s confusing gyratory, I pull into a petrol station.

It’s deserted, apart from the attendant locked inside the shop. Oh and there’s three guys hanging around the air pump.

It’s 1am in Tottenham. What are three kids doing in a petrol station, hoods up, without a car or a motorbike?

So I’m filling the car, trying to have eyes in the back of my head, and I can hear some distant discussion. I look up and sure enough, one of them is coming over to me.

The kid’s about 16, white, rocking a tracksuit and looking a bit lean.

“’Scuse me mate, you couldn’t spare me some change could you?” he goes. “My Auntie’s kicked us out.”

When people ask for change, I usually give them some. It’s not that I think the money will or won’t be used for drugs as well as bus fare, but it’s a dignity thing. If someone has opened themselves up enough to admit they need to ask for change, it’s hard to kick ‘em when they’re down.

“Sure,” I say and reach into my pocket, giving him a few quid. “It’s all the change I have.”

“Thanks mate,” he says and leans towards me.

1am, petrol station in Tottenham. Kid tryin’ a ting. Not being funny, but lets be real: now it’s really on top.

In an instant he’s really close. His lips look a bit white and flakey. Then he says pretty much the last thing I expected to hear: “give us a hug?”

Before I can really answer he’s giving me a hug. Damn this is strange, but OK, no trouble so far.

Then he really does it.

As he pulls out of the hug, he kisses me on the neck.

He chips back to his mates and the three of them shuffle off, god knows where to, since Tottenham Hale is an industrial wasteland, especially at that time of night.

I pay the attendant and head off home, getting mildly lost to the excellent Kush Arora CD. I’m a bit stunned but … damn, you gotta see the funny side.
Posted by Blackdown at 10:15 am

That's about the last thing I was thinking might happen. Truly a strange experience you had there! Lol! :)

they're a friendly bunch north londoners, especially when they're on the borrow.

i had a bloke bowl up to me in a kings x caff at 6am one morning after clubbing, who informed me he was a professional scrounger and proceeded to finish off my fry-up using my toast as a spoon. he didn't give me a hug though, but his mate was almost certainly the fast show's hardest job in the world character which at 6am was almost more than i could take: "i was a student once, tough life that, having to nick your electric from next door, sneaking into pub kitchens for dinners, stealing pens from bookies to write your lecture notes etc. etc."

the kush arora disc is excellent...