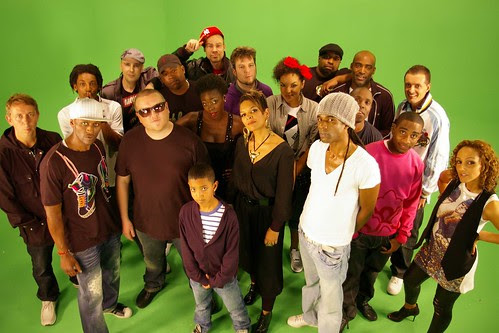 Zed Bias and friends at the Neighbourhood 09 photoshoot. How many legends can you clock?!

It’s nearly a decade since UK garage was at its peak and decade is, well, several lifetimes, in the hyper evolution of UK urban music genres. Put it this way, if you can be can be a grime MC younger at 14, then you could have been 4 when Architechs “Body Groove” came out.

But despite this chasm of generations, there seems to be some kind of collective memory causing a yearning not just for new vocal funky anthems, but ‘99’s vocal anthem in ‘09. The older smart-and-sexy crowd, 30 in 99 are in their 40s now, and the youngers were in pre-school, yet somehow the demand is there.

How else can you explain the phenomenon of 09 funky remixes of 99-02 garage classics? OK so there’s an obvious cash-in angle but Zed Bias said he was so bored of Facebook requests for the parts and bootlegs having their go anyway, he was forced by demand to reissue it. With that, to date I’ve clocked:

Geeneus has just gone even further back and cover Inner City’s “Big Fun,” a house classic in the late ‘80s! Monster Boy “I’m Sorry” already got brought back. Drum & bass outfit Nero have done a wobble remix of MJ Cole’s “Sincere,” but that doesn’t count.

Given all this, I think it’d be fun to speculate what garage classics are ripe for a relick. Who knows, perhaps someone from funky will read this and have a go! My longlist includes:

Leave comments below: what ones am I missing? Surely no one want’s another version of apparantly they do Baby D “Let Me Be Your Fantasy” do they?

The re-appropriation of these urban anthems bares all the hallmarks of the hardcore continuum: consuming, mutating and taking ownership of great riffs and moments in raving history so that it can be loved again by a new generation.

Grime MCs have been doing this of late too, over a much shorter times span: not unexpectedly given grime MCs, trading in a ghetto reputation economy, seem to feel they only exist or matter for as long as the words are coming out of their mouths and their name is on everyone’s lips.

Dizzee bars are a favourite, probably given the absence from the scene his success has caused. P Money, currently everywhere with his “Money Over Everything” mixtape, did it well on “P is a Rascal” on his previous CD, taking classic Dizzee bars, so embedded in anyone’s consciousness who saw him at this time, and remixing them line by line. In truth, so dense is the language that the grime MCs engage in dialog with each other, that they’re regularly remixing and re-appropriating their own bars. It’s just a fine line between a send (named, direct diss), "in-di-r" (unnamed, indirect diss), tribute (attributed) or remix.

I’m not saying funky doesn’t have anthems with identity of its own, it does in abundance from Kyla “Do You Mind” to the “Migrane Skank.” But I guess this all goes to show the strength of Simon Reynold’s “sceneius” idea, where a scene contains the collective gene pool of ideas, rather than one lone genius. The funny thing is, given the way scenes cluster so tightly around a few ideas (tempo, beat patterns, aesthetics, track goals etc), it’s amazing that the collective memory can last this long.

I suppose this phenomenon has existed since rave and before, with garage remixes of jungle classics etc, but what’s striking here that how within funky there’s acute memory of ’01 UKG anthems but selective amnesia as to ’02 proto grime classics (dubstep didn’t exist til 2007/8 in “road” eyes), like there’s some kind of membrane short-circuit from one bubbling, smart-and-sexy-yet-soon-to-be-ruffed-up-with-‘skank’-youts scene to another, almost ten years on.

Here come’s the lick again, it may taste familiar.

And DJQ has done one of Lil Man

Jahman Gee did a remix of Cleptomaniacs "All I do", which sounds more like a remix of the Bump'n'Flex remix if it makes any sense.

Also, Scratcha's been playing a funky remix of DEA Project's "Love Me", and another one which heavily samples "Got Myself Together", no clue who are these by though.

Is there anywhere I can listen to Paleface's remix of "Pleasure"??

I wonder to what extent the privileging of 1999/2000 in particular has a lot to do with the vibe of funky being quite similar. There's a rough'n'readiness to so much funky that reminds me of, say, Locked On in 2000 in particular - as opposed to the immaculate neatness of 1998 stuff or the harsh sharp stiffness of 2002 stuff - ALTHOUGH I can totally imagine a funky version of "Oi", oddly.

I sort of think of that Bump & Flex remix of "All I Do" as a really big forerunner for the darker funky, so I was unsurprised (though mildly underwhelmed) by the funky version.

it did make me chuckle Tim, that of all the UKG records "All I Do remix" got refixed already, since it's such a focus for you!

incidentally, although simon has likely helped to popularize it, "scenius" was apparently coined by brian eno:
http://www.kk.org/thetechnium/archives/2008/06/scenius_or_comm.php
http://www.synthtopia.com/content/2009/07/09/brian-eno-on-genius-and-scenius/

Yeah it was an oddly validating moment! (x-post)


funky gota get some new ideas in, this shit slows it down.

Not wishing to 'diss' the continuum pushers who seek to justify a 'switch-beat' or twoc'd break, but whose patterns were we ripping when this started? (name-check them one by one...) - nah truck or f**k for any man who steals his ideas...

speaks of a lack of originality that FNKY now has to cannibalise UKG classics and obscura...

...and it's probably why it'll never take of internationally like UKG never did

cos man there were some gawdawful cheesy remixes of average r'n'b trax back in the day that killed it for all the good stuff...

...wish someone one would put a stake thru the heart of the 'nuum then nail the coffin shut once and for all

seems the vampires and zombies run tings proper while the snake still eats its tail...

...will FNKY learn from the implosion of UKG as dubstep didnt learn from d'n'b's mistakes ?

BTW blackdown, are you still anti the subgenrefication of dubstep ?

@Pollywog, ello me old mucker, its been a while, thought you'd finally given up the ghost. You get let out of troll prison on parole early or summat? ;)

With a bit of editing, this could be a funky track:
http://www.youtube.com/watch?v=pcVdg3aZjGE&feature=related

salutations to you too blackdown but no i just retired to the beach and doing the fulltime dad thing :)

seriously tho can you see funky imploding ala UKG ?

...after the honeymoon, the guys get hard, then the girls leave. the guys realise they're dancing by themselves so turn to churning out cheesy remixes of days gone by hoping to lure the girls back

i've always said once a genre assimilates the latin gene into its matrix the end is nigh. So the writing was always on the wall for FNKY if thats what it started out with...

...reminds me of dubstep assimilating the asian influence via sinodub, then the middle eastern one and now FNKY reworking the sth american and african one

there just doesnt seem to be anything funky about it. Though funk origianlly meant a strong unpleasant smell and a state of cowardly fright...

...coincidence ? i think not

as for giving up the ghost, nah, just throttled back to dial up cos of where i live...sucky but i'm in it for the long haul...

...as long as the internet exists so will the dept of hell science in one form or another

maybe it's a parallel to reggae's continual re-interpretation of the riddims, lyrics, and melodies of generations before... some things just live on thru parallel scenes. Rocksteady riddims surivive thru dub, roots reggae, early dancehall, digi dancehall, bashment, etc.

what the hell is FNKY?

...maybe it's the ultimate signifier of afro influence supplanting the caribbean in the black streets as the power balance shifts and whitey jumps on the new bandwagon

Haha Dubmugga, watch out if you got your Summer of Love remix you might find yourself dancing with the girls.

I interviewed Lonyo once back in the day, I think he quite fancied himself.

...dancing with the girls near the cheese, that is.

rob sparx did a sick remix of masters at work, in a sort of UKG/4x4 dubstep style. that is all.

haha...little chance of that. i havent set foot in a club for years

one thing about 'nuum music. Do they have to be heard in the environment for which they were designed to truly "get it"...ie london clubs/raves ???

has anyone held a 'nuum event and played out the linear progression form ardkore to fnky. are there any nuum mixes around ???

...if not why not ??? surely the proof of the pudding is in the tasting or in this case hearing

take a crack at it soundbwoy. maybe it can be the next in your 'roots of' series

I see Simbad in the photo. Ledge.