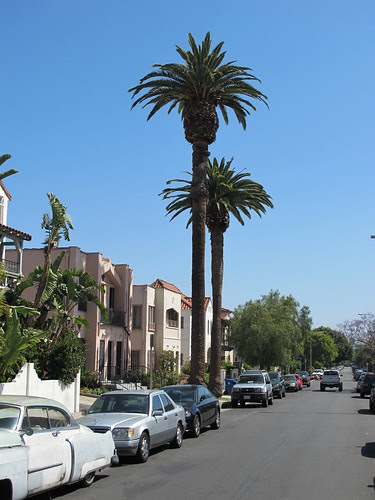 Just got back from Dusk and my two date tour of the US for Scion. To fight off the jetlag for a few more hours, here's some ramblings. Big up Danny and Adam for bringing us over. 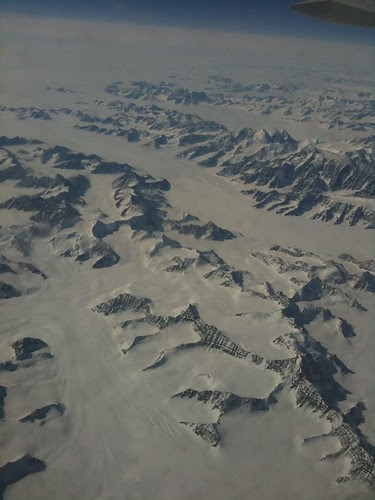 First off, whoever named it Greenland was having a laugh. I've flown over it before but never been struck just what amazing skiing it would make. You could climb one of those peaks and ski all the way out to sea!

It should be said it's mental that the same flight then goes over stuff like this: 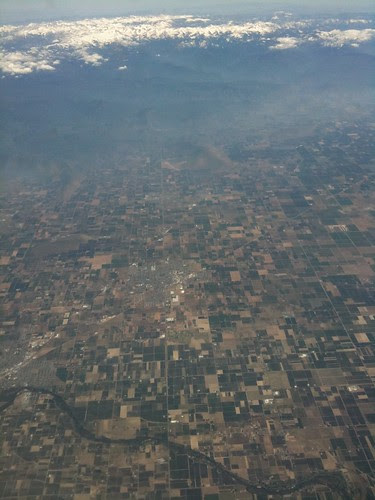 And yo, all my US agricultural mandem, what the hell is the deal with your vast circular fields?

Also I should add that looking down on the clouds while listening to LHF Infiltration mixes is intense. But oddly the tune of the trip for me was this...

... which got looped and looped on this Kowton podcast (also featuring WBeeza and Moodyman gems). Why can't I find "The Love Quadrant" on vinyl anywhere? Found this on vinyl thanks to the comments box, wahey! Bigup Mr Space Dimension for getting in touch too. 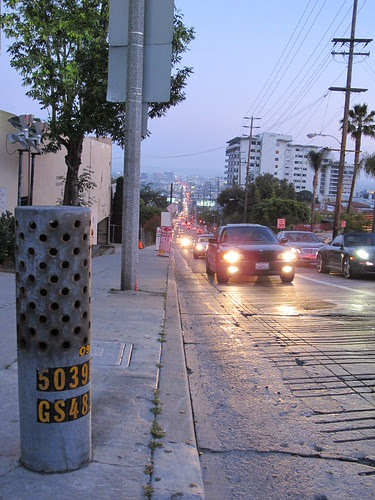 So yeah, LA... or to be more precise, Sunset Boulevard, Hollywood.

This was kind of nuts... 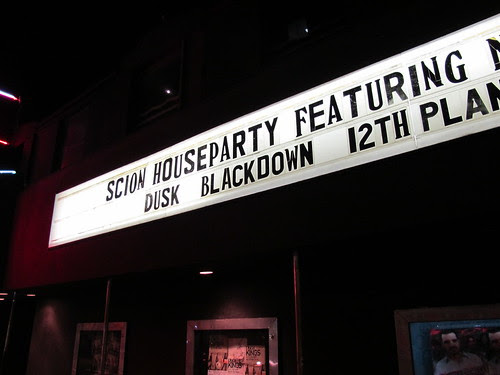 So was the backstage "green room". This shot is Dusk in the mirror next to the photo of Bob Marley standing in this very room... 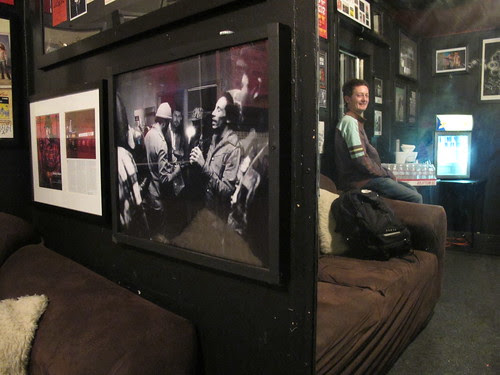 As the signed photos of Bob, Dolly Parton, Skid Row and 45,853.2 other bands suggested, we were in rock territory. The gig looked a bit like this... 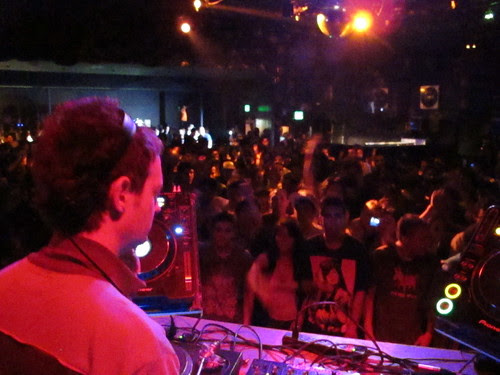 I'm pretty much zero compromise, so we did 'us': started with a beatless new Farrah tune, played 30 mins of UK funky, then 50 mins of dubstep and grime before ending with Origin Unknown's "Valley of the Shadows (31 Seconds)". And honestly? I think they were there for Nero's stadium rock. Trim, Tempa T and Goodz tracks got air. Any track that took longer than 1min to mix out of got air. Even 31 Seconds got blank looks: only Joker v Terror worked. They wanted a show not a set: we could have probably done with an MC. But that's cool: we did us and learned a thing or two about what LA crowds want. 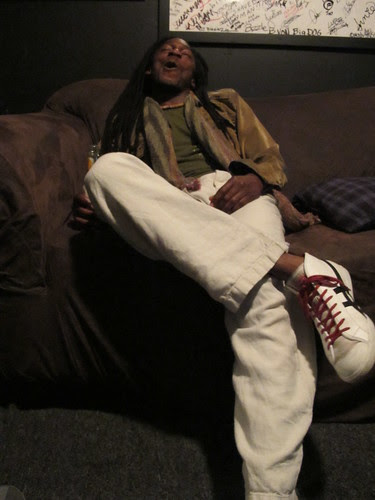 After the gig, Juakali was a really welcome face. It was so good to reconnect with dubstep, or in this case Dub War, family. Sadly it was too late to head over to Low End Theory: next time.

We did however, completely by accident, stumble upon this place: 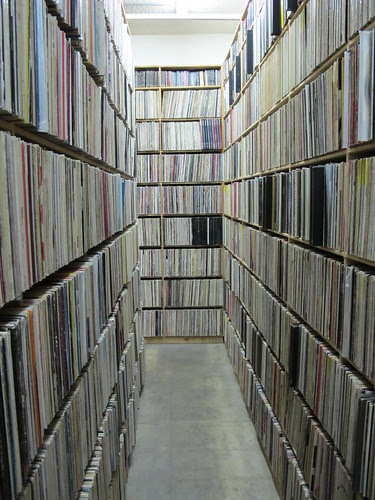 So you think you have a few records? This guy has 500,000. Half. A. Million. I bought some Arabic music and hoped the US border guards wouldn't take it funny.

Soon it was time to head for Texas... 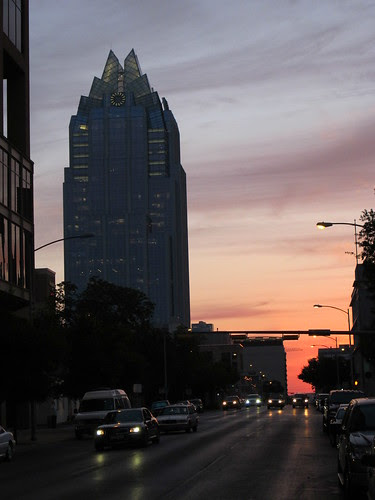 "Keep Austin Weird" say all the t-shirts. Keep it wonderful I say. Green and leafy from above, creative and funky from the ground. Mmm to BBQ and warm nights. Ohmydayz to the guys from the US 3rd Armoured Cavalry turning up at our hotel in Stetsons, spurs and green uniforms for some kind of function. (I didn't take any photos, sorry, they have tanks... lots of tanks). 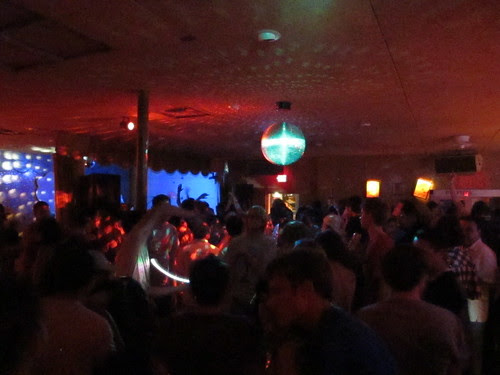 The gig itself was total bliss: beginning with a half empty dancefloor, people seemed to join and really listen and respond to what we were playing, like our new 130bpm stuff or "deFocused." They were so responsive we began to dig out all kinds of dubs. Vibzin's "Hot 4 U" got reloaded seconds after it began giving me goosebumps. The set ended in jungle: Omni Trio, Shy FX and Adam F "Metropolis" amongst others. 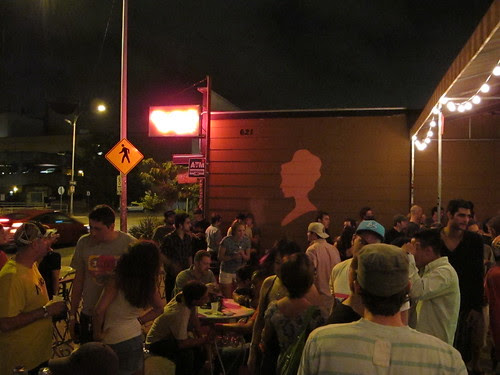 Chatting to VVV and his lot afterwards, me supping what is called a 'shot' of tequilla in the US but we'd call 'half a pint', Dusk pondered if it was his favourite set of ours ever? 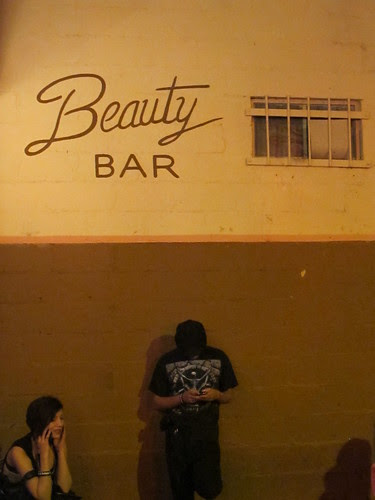 Austin, we salute you. Give us a shout if you ever need us back. Then it was time to roll home... 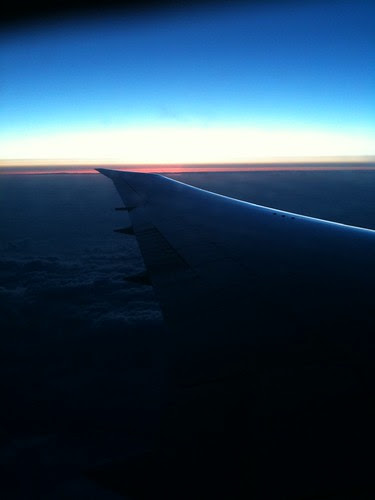 Posted by Blackdown at 9:24 pm

you can't find the love quadrant because it's out on Boxcutter's label.
a fact that helped raise the, deserved, hype level enough for the vinyl to fly off shelves.
big record.

thats crazy man; im so upset i missed u guys in LA. i live here now and the usual stuff that gets ppl hype here is pretty awful to be honest; would have been nice to hear some more refined stuff out for once... austin is my hometown - its pretty dope and yeah you're right, its a very open minded crowd usually. hope to catch u next time!

next time make sure you stop by Chicago!

Hey Martin, You're playing with dusk in Manchester on saturday. A tenner is a par though, get me in for free bruv?! You can sign my copy of The Bits as well....

just bagged a copy of the SDC record at www.roughtrade.com/

thanks Mr Riff, you're a badman, grabbed me one too, and picked up some Mala I'd mean to for a while, while I was at is...

Hopefully you can make it to Miami next time!

Yeah, Austin was amazing. The place has a certain attitude running right through it. Even down to the grackles (black crow-looking things with fancy tails that make an absolute racket, right?): we saw a group of four of them over the top of the Capitol building giving a fairly hard-looking hawk a serious amount of grief until he scarpered.

Stayed on for just under a week after Blackdown headed back and glad I did - it's a crazy place. "Keep Austin Weird" t-shirts everywhere. Great food, shops and markets selling all sorts of strange stuff and decent record stores - picked up some rare exotica, disco and Iranian funk - tasty.

And *that bridge* with all the bats under it - thought people were pulling my leg about that... Like waiting for an eclipse - hundreds of people chattering amongst themselves in anticipation then suddenly a massive cheer as the critters start bowling out looking for their dinner (or whatever it is that 1.5million (?!?) bats get up to after dark).

Love the fact once you escape 6th Street there are several self-contained districts with independent shops and restaurants you can easily lose a day in, although crossing the interstate by foot to get to them is perhaps not the wisest move - met some truly wild people hanging out on the junction one night! [looked like extras from Left4Dead2...]

Would love to go back to San Antonio too: having spent a morning checking out the old school spit 'n' sawdust of Gruene, we had a proper chill on a seriously hot afternoon down there. Strolling up the riverside, past all the restaurants, checking out the weird art hanging underneath the bridges was just what the doctor ordered.