How do I get started in production? 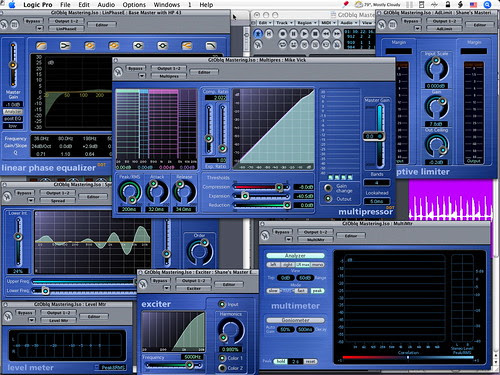 I’m no production expert, honestly I’m not. If you want the info on every VST ever, the secret to world’s most mind blowing mixdowns or how to record to 5.1 surround sound, then there’s tons of people out there who can help. But Dusk and I have been producing for over ten years, written an album and some singles and I co-engineered about half the LHF album, so periodically people ask on Facebook or whatever about how to get started in production and this is something I overcame, so I thought I’d share my thoughts. Who knows whom it will affect and what music might, down the line, come of it? Just that idea alone, of all those possibilities, makes me want to write & share this post…

Get hungry, find a way

Learning to produce from scratch is hard, it is like learning an entire language in itself, so the first thing you’ll need to be is hungry. I could probably explain how to how to beatmix (DJ) in ten steps and teach someone in an afternoon. I don’t think this is possible with production. So a hunger to overcome obstacles and find a way to your sound is essential. If you’re not sure, it’s probably not for you: this is not the path of least resistance.

This is something I say to people when they ask me about getting started and perhaps it sounds a little strange but as a guiding principle, it’s true. Whatever you do, find a way – any way - to make music and do it a lot until you progress.

My advice, if you’re into studio based music, is to beg, borrow or steal one of the soft studio packages. Reason, Fruity Loops or Ableton are a great start. Why not Cubase, Logic or ProTools straight away? In my experience the learning curve is too steep. You’re busy looking for your sound, learning about chords or arrangements, positionising and rhythmic composition – the last thing you need is the most advanced sound engineering package to master too (been there, lost months or years to it). Just get something up and running so you can make music, a lot. That’s the single biggest, most fundamental step: all other music making after that is just an iteration.

Don’t let the machines master you

At first music production programs are confusing, they are. Most presets are crap and the tracks you make don’t sound right. Essentially the technology is having its way. You need to fight those crap pre-sets away, throw out default samples and most of all, don’t let all your music fall on the grid. Most software programs lead you to making music in regular intervals: 1 beat, ½ beat, an 1/8th a 1/16th or 32nd. But stick to these and your music will sound stiff and lifeless. Master the machines and find a way to your sound, not the sounds you first find in front of you.

Find a good source of advice but…

Wheel re-invention is an admirable pursuit for which there are no prizes.  In the early days what you’re technically trying to do has probably been done hundreds of thousands of times before. One of my regrets is that when Dusk and I in 2001 decided to start producing that we didn’t ask enough for advice. Most producers I now know are more than happy to talk about production, often at length. Some of them prefer talking about sound engineering than music (though that’s another story). Find one of these people who’s on your wavelength and ask if they’ll show you how to get up and running. Trust me you’ll save yourself years. But remember you will need to…

… decide what to ignore.

Producers often present subjective opinion about sound engineering as fact. They describe their single data point as an incontrovertible rule. Absorb from them for a while but never forget to log what you’ll take on board and what to ignore. This will prove vital in developing your sound. What sounds you refuse to use or techniques you wont touch are as vital a those you do.  Later on when you have a sound of your own you may want to question what you’ve questioned and rejected, if you get what I mean, so you can evolve your sound (I swore for nearly a decade I’d never use a 4x4 kick, but after UK funky decided that’s exactly the reason to use one and see if we could still make it sound right for us) but that’s a bridge to be crossed when, well, there’s some water under it.

Find your own way

As an extension to “decide what to ignore,” finding your own ways to make music is also a great route to individuality. Working out weird new things to sample, time signatures to work in, odd hardware configurations, mutations and fusions of otherwise un-connected styles will all help set you apart from the pack. Your sound is a reflection of you. So, who are you?

Often at the beginning of your production career your hunger will be fueled by producers who have inspired you. You want to make music because of the way their music makes you feel (in my case it was El-B). In the process of getting up an running, you might well find yourself in a phase where you – consciously or subconsciously – start to sound like them. This is normal but you should probably get over it as quickly as possible. Honestly you should, no one is going to play weak clones of Burial and your J-Dilla tribute? They're not.

Now I’m all in favour of “scenius,” the idea of producers collectively vibeing off each other, that a scene works as a hive, honestly I think it’s vital. And equally while some individuals contribute more than others, few exist in a vacuum: they are just probably less overt with their influences than others.  So my advice is look deeper into what inspired you about the producer in the first place and look deeper into a few others, then combine them in your own, unique way. Then it’s greater than the sum of its parts.

When I say “look deeper,” here’s an example. My inspiration was El-B circa 2000, so a cloner’s approach would be: right, let’s get a woodblock and put it on the 2 & 4, few hats & kicks, maybe get a bassline and some r&b vocal samples. There: a shit Ghost clone.

Instead, I’d say what I loved about Ghost records was their delicious sense of tension, perfectly balanced between dark and light. Their juxtaposition of masculine and feminine, rude and gentle. Finally they were percussively funky, all swung and skippy, i.e. they had elements off the grid. Now all these learnings can be applied in quite varied contexts, tempos and to different sounds, arrangements and types of percussion. Do this and it won’t sound like a Ghost clone but it might be in part inspired by it. The other part inspiration is all yours.

This is useful once you get up and running. I had this teacher at school that said “your first idea will be your worst one” and while it may not be incontrovertibly true, it stuck with me. Certainly when I’m first sent unreleased tracks by producers I can hear if someone’s "got something" but they invariably get better over time. Having someone near you who can give honest feedback can help you make this progression. Super famous DJs will probably be too busy to give you detailed feedback, but a good A&R, producer or DJ you connect with should be able to help. If it sometimes hurts a bit, it may end up being useful in the end.

Be in it for the right reasons.

Learning to produce well and find your sound takes ages: years of dedication at the expense of other things that are more fun like drinking, clubbing, sex, drugs and Xbox. It’s also a terrible way to make money: people don’t buy music anymore. You can make more money DJing for 1 hour than a four track EP makes in a year, and four good tracks could take you months to write. Now as Bun Zero points out, as a DJ you increasingly need to produce to "make it," so the two path's are interlinked, but making it as a DJ is a separate article entirely. So my position is: make music because you love it; honestly it’s not a good “career” move and if you write beats from your bank balance not your heart, people can tell.

I think that’s enough for now. Other follow up topics are kinda subsequent issues to the above, so I’ll leave them for now, but they include in no particular order…

This is the most amazingly useful and common sense article about music production I have ever read on the internet. peace.

This is a great article with some great advise in it. Not good to hear about the lack of money though in making music, as this could put talented people off as you need to make a living. Why can't the governments of this world spend the money they spend on defense and guns on sponsoring people to make music. The world would be such a better place! Why kill people when you can create such joy from music... Adam

yeah big ups for this one blackdown, really insightful, especially for those times when you question why? why why why? it's a labyrinth and you gotta keep going!

"Learning to produce well and find your sound takes ages: years of dedication at the expense of other things that are more fun like drinking, clubbing, sex, drugs and Xbox."

Hear hear, my production's been improving lately but somewhat at the expense of my social life and love life, and I've not picked up a computer game in years... the joys of having a full time job as well as producing and DJing!

great article, thank you! just emailed it to my friends!

We were emailed your article today and read through it, enjoyed it and took a lot from it.

It's a thoughtful, level-headed, honest approach and the type of article and quality writing we love at Electric Plums.

We're a young website and one of our big goals is to start our own eponymous label & produce home-grown tracks. It currently feels daunting but crucially, as you state, the hunger is there.

Thank you for a great read and we'll be back to revisit your blog.

thank u ! this will be a serendipitous summer for me thank u

Wicked article. Would like to hear a 2nd part on the DJing world!

Wicked article! Would love to hear a 2nd part on the same kinda tip but with DJing at the forefront. Big ups!

what do you do when someone rips you and you don't find it fun any more?

Where's the next installment? Been waiting a month!

Paul said...
This comment has been removed by the author.
3:07 pm