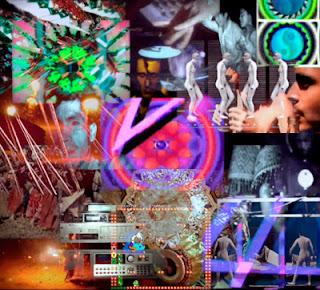 The world is not as it seems, or moreover, as it’s seen.

LHF are the keepers of the light, one that burns brightly but yet is increasingly threatened with extinction. Lit most recently in London, this energy spread to sound waves and was amplified by the pirate broadcast network infrastructure that flares up at night and transmits in encrypted code. In transmission of that enflamed message, errors were made, mutations occurred and unintentional frequencies were received. The wave’s cycle became a circle: transmission became reception such that notions of then and now, or here and now were no longer distinct. Hackney now, Croydon then? India now, Egypt or ancient Greece then? New York a decade ago, New Orleans a century back, Milky Way eternally? Is this reality or a memory? Where we are or where we’re going?

Questions. LHF’s vision leaves you blurred, asking of you more than you had answers for. Is it of now or then? Is it of here or there? Why doesn’t it sound like everyone else… or should that be ‘why doesn’t everyone else sound like it?’ Does the mind of a child see most clearly? Does… does… does what?

To focus on the mind on the clan is to miss the heavenly glory that backlights them. Where they’re from, where they are, where they’re going – this is to be looking in the wrong direction. Instead ask why are you here, how did you get here and where are you going? Their imprecision, their lack of distinction merely reflects the imprecise, ill defined yet wondrous backdrop that surrounds us all. As one LHF fan put it recently: “Make it random, we are all keepers of the light…”

In awe of how good this album is, will there ever be a vinyl release though?

Heard the March Rinse set was a LHF special. When can we get it?

That Sunset track for me is really something special. Evokes strange new emotions in me.

It sounds like they just shut out whatever else was going on outside and just did what they wanted to do.

What anon asked, will there be a vinyl release soon?

The more you listen to this album the more it caresses your senses...It is truly a great body of work...

man can't tell how much i've been waiting for this one to drop, and now it's here finally *excited*

as it was asked already above, will there be a vinyl version?

So good topic really i like any post talking about Ancient Greece but i want to say thing to u Ancient Greece not that only ... you can see in Ancient Greece Oikos and Polis and more , you shall search in Google and Wikipedia about that .... thanks a gain ,,,