Last week as an impulse, I posted a poll on my blog, trying to answer one simple question: what is the single biggest influence on how you buy music? As a label co-owner in changing times, the issue had been plaguing me.

Amazingly, it has received over 750 votes to date: shout to you if you voted! I wanted to share the findings, but first a few caveats about them.

The data is undoubtedly skewed because it’s published on a specialist music blog. That’s fine, in fact, it’s ideal:  I wasn’t looking to answer the question for a bunch of X-factor fans.

The survey makes the assumption that you have chosen the music you buy because you like the music – this is about the factors that lead you to hear, read about and ultimately by a given track.

I also enabled multiple votes per person after feedback from the earliest voters. The results seem to reinforce this decision.

I also picked the initial set of choices. I had to start somewhere and I thought I’d added enough to show breadth. I also live and breathe underground music so had a sense of the basic touchstones. However I did leave the option open (“none of the above – please suggest”) and many people did. More of which later.

Question: what is the single biggest influence on how you buy music? 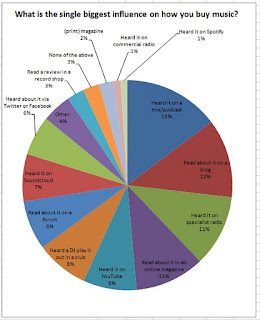 Looking at the results, the biggest single influence on how you guys buy music is that you heard it in a mix or podcast. More telling to me is that since the largest category is only 15% of the sample, it reinforces what I’ve felt for a while now: that there is no ‘kingmaker’ in this corner of underground music. Instead we see a broad pattern of different mediums of how you’re influenced to consume music. 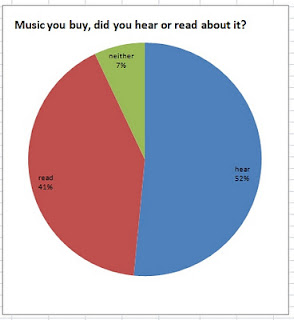 Digging a little deeper into the survey, I decided to cluster the data by a binary: was the main influence the written word or sound experienced? I was curious because as long as I’ve loved music I’ve loved reading about it. In fact it was 90s music magazines that were my history lessons into dance music and became my inspiration as to how I could first participate in music culture.

Yet after that I had the realisation – not that it’s particularly revelatory or anything – about the power of simply hearing music direct, rather having it filtered by someone else first. Hence why Dusk and I did radio shows, from Touch FM, Groovetech and later Rinse FM.

The chart is a pretty good win (41%) for “read” I think, all things considered. 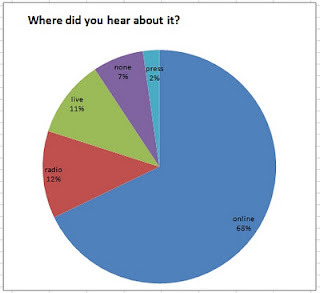 The next slice I took was to cluster together the results based on what type of medium they were. So under “Online” I grouped the votes for Podcast, blog, online magazine, YouTube, Forums, SoundCloud, Twitter, Facebook, Spotify. Radio grouped specialist and commercial radio. Live was the sum of hearing it in a club or a record shop. Press was both newspapers and print magazine. This roughly reflects the type of PR specialists that exist: press, online and radio pluggers.

Looking at the results it’s a landslide for “online,” with 68% of the votes. Shockingly, considering their massive audiences, press only gets 2% of the votes. So while 41% of people in the sample are most influenced by what they read, only 2% of them do so offline i.e. in print.

[UPDATE: Keysound Statto Dusk has let me know I may have flawed this section a little by allowing (upon requests by early voters) multiple votes per person and there being more options that fall into the 'online' camp than others, but I'm not concerned it will skew the final conclusions too massively...] 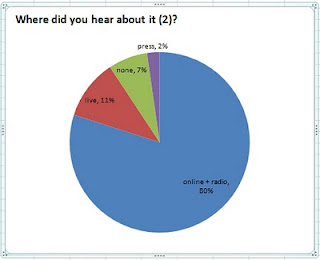 It seemed to me there was one final consolidation that made sense. Most radio stations have listen again and most specialist shows are at night, so while you may have heard that tune “On Logan’s Kiss show,” a lot of the times people may have listened online again or consumed a ripped podcast version.  Combining online and radio gives this segment a whopping 80% of the votes. Online is the kingmaker!

None of the above

5% of the sample, ie 34 votes, didn’t vote for one of the 13 options I proposed. Instead they left their own. These are:


Interesting to see the votes for “heard it in a record shop” – which I... forgot.  I guess that gives away my music buying habits these days doesn’t it?

So, there we have it. People who read my blog are influenced to buy underground music via a long tail of factors, mostly of which are online and allow them to hear the music.

So, what did I miss?

Posted by Blackdown at 8:10 am

I'm with you on reading about music. Can't get enough of it.

Totally agree on this addiction of reading music, both online and paper copies. I've already tried to stop being a subscriber in several mags but I can't help it, perhaps I'm too old to cut those bonds from an era where I truly opened up to music writing(something that I usually ignore in the late eighties, I was too busy listening to radio).
Maybe it is a generational thing from people who were nurtured/involved/raved in the 'nuum throughout all the nineties? The fan zines? The excitement of the early internet and (back then) immense networking possibilities? The rave community? Spread the word in every possible way?

Great post by the way and definitely interesting to deeply analyze.

interesting. not to get all technical, but i wonder about the wording "heard it" versus "heard about it". to me, "heard it" means you heard the actual track somewhere (in a club or store, on YT or soundcloud, etc.), whereas "heard about it" could mean someone told you about it or you read it, right? for example, i first "heard about" damu when i read the posts on your blog. that might wording might have impacted the results. just a thought.

Just so you know, pie charts are evil and bad.

See: http://www.juiceanalytics.com/writing/the-problem-with-pie-charts/ and lots of other places on the internet.

Re: reading about music, I'm in the same boat as you, Gareth, and jasl - and that makes sense, because of course it's going to be people who love reading about music who are going to be reading (/writing!) your blog. The way I really started getting into the nuum in a big way a couple years ago was through your Grime/Dubstep column in P4k, for instance (and for that you have my eternal gratitude).

Yeah, I guess sorta mean "a good result for 'read' considering 'hearing' is so direct and that there are so many ways of hearing music now...

@JAM - when I said "heard" I guess I strictly meant you had access to the audio, unfiltered by a 3rd party writing about it. In on scenario there are two players (the music, you) in the other there are two (the music, the critic/fans, you...).

Recommendations from friends are interesting, since when someone gives me one, I typically then go hear it with my own ears, not buy it outright, but perhaps some people do.

does this show that people dont't search for the music anymore? like in, lets see what's new kind of a way and listening and searching and digging and ... ?